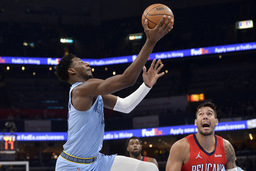 The win solidified Memphis' hold on second place in the Western Conference as the Grizzlies won for the second time in three games. Ziaire Williams finished with 16 points for Memphis, which set a franchise record with 42 fast-break points.

"Obviously getting stops on the defensive end helps us get out and run rather than taking the ball out of the net," Morant said. "At that point, we've got a lot of guys who can push the break."

CJ McCollum led the Pelicans with 32 points, going 13 of 21 from the field, including 5 of 10 from beyond the arc. McCollum also handed out 11 assists. Willy Hernangomez scored 17 points and Naji Marshall 16.

Memphis extended its lead to as many as 35 points in the third quarter, outscoring the Pelicans 35-26. With the Grizzlies holding a 112-84 lead entering the fourth, Pelicans coach Willie Green went deep into his bench and the reserves finished the game.

"I just felt like they were a step faster than us to pretty much everything," Green said. "That one is on me. I have to do a better job preparing our team to go out and play against a really good team like Memphis. We (weren't) ready to play."

Asked where his team could have done better defensively, Green replied: "Everywhere. We could have been better everywhere. We have to have more resistance than we did tonight."

The Grizzlies, who have had spotty success since the All-Star break, entered the game a half-game ahead of Golden State for second place in the Western Conference.

Memphis built an early 20-point lead before New Orleans answered with scoring from McCollum and Devonte' Graham. The Grizzlies shot 55% in the first half, including 11 of 21 on 3-pointers.

That helped Memphis to a 77-58 lead at the half. McCollum had 25 points for New Orleans. Bane led Memphis with 18 points and Morant had 14.

Bane was particularly effective in the game, including converting 5 of 9 from outside the arc. He also added six assists as Memphis handed out 30 assists in the game.

Bane's night included collecting his 300th career 3-pointer in only his second season.

"The simplest thing is he puts in so much great work to score in a variety of ways," Grizzlies coach Taylor Jenkins said of Bane. "Off the bounce, but especially from the 3-point line.

"Every time he shoots it, I think it's going in."

Since joining the Pelicans after the trade deadline, McCollum has blended with the team. He has reached double-digit scoring in all 11 games and was averaging 23.8 points in the previous five games as the Pelicans moved into the postseason picture. Green called McCollum a pro and someone who has done the extra work to blend in with his new team. "It's why he's been successful for all these years, because he just stays consistent with what he does," Green said.

"We gave up 44, 33, 35-point quarters. You're not going to beat nobody giving up that many points. They had 100 points (by) the third quarter." - New Orleans guard Devonte' Graham

Pelicans: McCollum entered Tuesday's game averaging 26.1 points, 6.1 assists and 5.7 rebounds in the 10 games since his trade to New Orleans from Portland. . Tony Snell started in Ingram's place, his 10th start of the season, but first with New Orleans. . C Jonas Valanciunas, who played parts of three seasons with the Grizzlies, made his first return to Memphis after an offseason trade and received a warm welcome from the Memphis crowd.

Grizzlies: The 77 first-half points was three short of the franchise record of 80, scored in the second half against Oklahoma City on Dec. 2, 2021. ... Memphis, which managed only five 3-pointers in a loss to Houston on Sunday, made seven from outside the arc in the first quarter and finished with 16. . The 44 points by Memphis in the first were the most scored in any quarter this season.

Pelicans: Open a four-game homestand on Wednesday against Orlando.