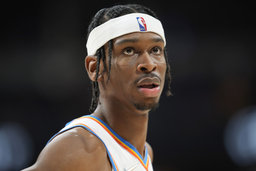 The Thunder were a 14-point underdog, according to FanDuel Sportsbook, but clamped down on all of Denver's starters not named Nikola Jokic. The ploy allowed them to lead by double digits in the fourth quarter, weather a run and then pull away late to snap Denver's six-game winning streak.

Already missing several key players, Oklahoma City scratched forward Derrick Favors due to a sore lower back before the game. The Thunder found a way to neutralize Denver behind the shooting of Gilgeous-Alexander, Roby and Vit Krejci, who combined for 10 3-pointers.

"We needed everybody's contributions to win the game tonight. But I also think games like this, when you're down as many guys as we are, it builds confidence in what we're doing," Thunder coach Mark Daigneault said. "It builds confidence in our identity and our style, knowing that if we lean back on that, it can be effective regardless of who we have on the court."

The Thunder entered the game last in the league from 3-point range at 31.2%. But they hit 16 of 29 and Gilgeous-Alexander's step-back deep shot with 1:27 left sent the fans to the exits.

The Thunder had their double-digit lead trimmed to 99-98, only to go on a 7-0 run that was punctuated by a dunk from Aleksej Pokusevski.

"I could give a (expletive) about the offense," Nuggets coach Michael Malone said. "That kind of defense is embarrassing. The effort that was put forth tonight was embarrassing."

Jokic led Denver with 22 points and 16 rebounds on a night when no other starter scored in double figures. The starters were a combined 1 of 25 from 3-point range. Reserves Bryn Forbes and Bones Hyland were keys to keeping Denver in the game as the second unit played heavy minutes. Hyland had 19 and Forbes 18.

Malone warned his team about letting off the accelerator against a depleted Oklahoma City team.

"Every game is not easy. It's an uneasy business," Malone said. "You always try to prepare your players not to exhale and not to look past this opponent. Because we all know what happens when you do that."

Nuggets: C DeMarcus Cousins wore a salmon-colored sneaker on one foot and a neon green version on the other. Cousins fell to 10-1 in games in which he's played for the Nuggets. ... G Will Barton finished 0 for 9 from 3-point range to remain one behind J.R. Smith's mark of 768 for most in Nuggets history.

Both Michael Porter Jr. (back) and Jamal Murray (knee) are making steady progress, with Porter recently playing 1-on-1 at practice.

"I don't have a timeline for either one of those guys, but I do know that they are both inching closer to a potential return and that's exciting," Malone said.

Malone cautioned it may take a little time for them to get back up to speed. That may be especially true for Murray, who's been sidelined since tearing the ACL in his left knee last April.

"You have to temper the excitement of getting Jamal back with the realization that he's not going to be the same Jamal right away," Malone explained. "You take anybody away from something they love for a year, there's going to be baby steps."

Roby didn't realize how short-handed his team was - until he sat down.

"Saw how much space there was on the bench," Roby cracked.