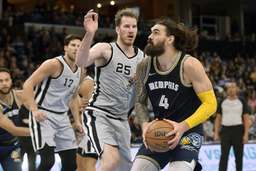 The arena was still buzzing from Morant's fast-break slam late in the second quarter when Steven Adams delivered a length-of-the-court pass to Morant, who caught it mid-air and flipped in a buzzer-beater from the left baseline for a 68-58 halftime lead.

Morant also hit a 3-pointer from near the logo with the shot clock running down, creating a load of highlights from a memorable night.

"It's got to be the 50 (points)," Morant said when asked what was most memorable, adding: "I'm thankful for my teammates, my coaches. They believe in me and have all the confidence in the world that I'll make the right plays."

Morant added 13 consecutive points during the fourth quarter to break the game open, following up a career-best 46 points in a win Saturday at Chicago by connecting on 22 of 30 from the field. He hit all four 3-point tries as Memphis won its second straight.

Morant's performance was the first 50-point game in Grizzlies franchise history. He said teammates began feeding him the ball in the fourth quarter when the 50-point target was in sight.

"He's at the rim every night, but the way he put it together tonight, he was just in attack mode from the jump," Melton said. "He got whatever he wanted, and it looked easy out there. It was just special to be out there and watch that."

Lonnie Walker IV led the Spurs with 22 points, and Dejounte Murray added 21 points and eight assists before being ejected late in the fourth quarter. Poeltl finished with 16 points and 10 rebounds.

The Spurs loss left coach Gregg Popovich one game short of tying Don Nelson for the most regular-season wins by an NBA coach.

"He's a beautiful player," Popovich said of Morant. "What else can you say about him? It's not just that he's athletic. Everybody says, `He's athletic.' Somebody says, `He's a freak of nature,' because he's so fast. ... But he makes decisions. He knows what is going on on the court.

"So, you combine that cerebral part of his game with his athleticism and you've got a special kid."

The Grizzlies built the lead to 13 early in the fourth, their largest of the game at that point, but the Spurs were within 104-99 near the midway point of the fourth. That's when Morant scored 13 straight.

Spurs: G Doug McDermott, listed as questionable with right knee soreness before the game, was available and finished with 14 points and five assists. ... San Antonio went 4-4 on its annual Rodeo Road Trip. ... Walker came off the bench and scored 11 points in six minutes of the first quarter. ... Poeltel and Keldon Johnson, who sat out Saturday's loss to the Heat with lower back soreness, returned to the lineup.

Grizzlies: F Brandon Clarke, who was listed as questionable with a left eye abrasion, was available. ... Have won five straight over San Antonio. ... Adams had 14 rebounds. .Morant's 22 made field goals also was a franchise record.

Morant said the pass from Adams that led to the 19-foot basket in the closing second of the first half was "something I'll probably never be able to do again." But he added that if Adams is the quarterback from that type of throw, there's a bit of wide receiver in Morant's ability.

Melton was in awe of several things about Morant's performance, but the dunk over the 7-foot Poeltl drew most of his praise.

"That dunk was crazy," Melton said. "The way he rose, stared at him and dunked it."

Grizzlies: Travel to Boston to face the Celtics on Thursday.