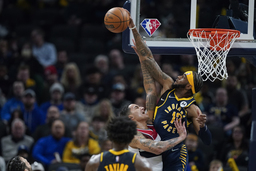 INDIANAPOLIS (AP) Tyrese Haliburton leaned on Tristan Thompson for advice when the two were traded to Indiana last week.

On Wednesday night, the teammates celebrated one final performance together.

Halibutron had 21 points and 14 assists, Thompson finished with a season-high 17 points and the Pacers beat the Washington Wizards 113-108 in Thompson's final game with Indiana.

"It was fun while it lasted," coach Rick Carlisle said before announcing that Thompson will be waived Thursday. "I don't mind announcing that because it's a rare chance when you get to thank a guy in front of his teammates and he played very, very big tonight."

Thompson is expected to sign with the Chicago Bulls.

For the Pacers, it also was a rare victory dance. They ended a season-worst seven-game losing streak with their first February win. And they beat an Eastern Conference foe for the first time since Dec. 16.

Terry Taylor added 18 points and nine rebounds for Indiana. But Haliburton and Thompson, who were teammates in Sacramento before coming to Indiana, played primary roles on a night when the short-handed Pacers had only eight players available.

"It's a hell of a way to go out," Haliburton said, referring to Thompson. "He was hooping tonight, was really good in the pocket. I thought he had a really good game."

Kentavious Caldwell-Pope led the Wizards with 27 points. Kyle Kuzma finished with 26 points, 15 rebounds and matched his season best with six 3-pointers as Washington lost for the fourth time in six games. Kristaps Porzingis continued to sit out with a bruised right knee, and coach Wes Unseld Jr. also ruled out Porzingis for Thursday's game against Brooklyn.

With both teams starting the day below the Eastern Conference's play-in round cutline and the long break looming, the game, predictably, lacked energy.

Indiana appeared to take control when it scored six straight points to grab a 76-63 lead late in the third quarter. But Washington steadily cut into the lead, closing to 86-82 early in the fourth and eventually making it 95-94 when Caldwell-Pope made a 3-pointer with 5:18 remaining.

But Indiana answered with six straight and after Caldwell-Pope made back-to-back baskets to twice make it a two-point game in the final 90 seconds, Oshae Brissett's dunk with 21.3 seconds left finally helped Indiana close it out.

"You never want to come up short but you always want to fight and give yourselves a chance," Unseld said. "We didn't play great but we played good enough to give ourselves a chance and stay in it."

Wizards: Caldwell-Pope made five 3s. ... Deni Adveji had 14 points and seven rebounds. ... Ish Smith and Raul Neto each scored 10 points. ... After winning all four matchups last season, including an elimination game in the play-in round, Washington is 1-2 against the Pacers this season. The home team has won all three games. ... Kuzma has 22 double-doubles this season, already a career high.

Pacers: Buddy Hield had 15 points, seven assists and five rebounds. ... Brissett had 17 points and six rebounds. ... Lance Stephenson finished with 11 points, six rebounds and four assists. ... Indiana has had losing streaks of seven and six games as well as three four-game skids and two three-game losing streaks. ... The Pacers are 1-7 in February.

Injuries have kept Pacers guard Malcolm Brogdon on the bench for all but three games since Dec. 15. Carlisle remains hopeful, though, that Brogdon will return from a sore right Achilles tendon when play resumes following the All-Star break.

"He's continuing to make good progress and our hope is after the All-Star break he can be ready," Carlisle said. "Nothing's for sure, but we'll see. With an additional seven or eight days, our hope is he could possibly be ready to go."

"That number, 74 points, you're not going to win many games with that most nights," Unseld said, referring to Indiana's point total in the paint.

Wizards: Visit Brooklyn on Thursday before heading into the All-Star break.