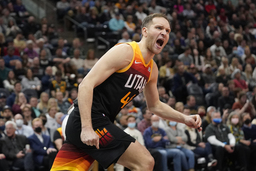 SALT LAKE CITY (AP) Trent Forrest had career highs of 18 points and eight assists to lead the Utah Jazz to a 108-104 victory over the Denver Nuggets on Wednesday night.

Utah won for just the third time in 14 games. The Jazz swept the season series with the Nuggets, 4-0.

Utah outscored Denver 64-42 in the paint. The Jazz also finished with 20 points off 14 turnovers by the Nuggets.

"Those are the plays that are the most exciting for our team," Conley said. "It wasn't the dunks. It wasn't the threes. It wasn't the big (offensive) plays. The big plays for us were when we scrapped for a loose ball or came up with a steal."

The Nuggets trailed most of the fourth quarter before tying it at 97-all on Barton's driving layup. Denver turned it over on back-to-back possessions, setting up a pair of baskets by Gay. It sparked a 9-2 run that gave Utah a 106-99 lead with 1:07 left.

Forbes cut it to two points on a jumper with 18.9 seconds remaining. Bogdanovic hit a pair of free throws to seal the win.

"You got guys out there that may not be there in most situations . experience is the best teacher for those guys being out there to close a game," Nuggets coach Michael Malone said. "It was positive and there's also a lot of learning, clips and possessions that they can get better at next time they're in that situation."

The Jazz built their largest first-half lead after Bogdanovic completed a three-point play for a 19-10 lead midway through the first quarter.

Denver countered from the perimeter. The Nuggets went 9 of 14 from 3-point range before halftime and erased the deficit late in the first quarter. They built a seven-point lead early in the second quarter, going up 47-40 after scoring 3-pointers on four straight possessions. Reed hit back-to-back outside baskets to kickstart the spurt.

Utah clamped down defensively in the third quarter, holding Denver to 18 points. The Jazz did not trail again after Bogdanovic drove for a dunk to cap a 6-0 run that gave Utah a 70-65 lead.

"We could have made the game a lot easier for ourselves," Forbes said.

Forrest played a season-high 38 minutes for the short-handed Jazz, who were missing Mitchell and Clarkson and Joe Ingles in their backcourt. He not only turned in career highs in points and assists, but he also committed zero turnovers.

He was sidelined in Utah's 126-106 loss to Minnesota on Sunday while recovering from a right ankle sprain. Forrest said the ankle felt a little sore after the game.

"I probably haven't played that many minutes since high school, honestly," Forrest said, "I'm definitely feeling it a little bit."

Acting head coach Alex Jensen earned his first victory since stepping in for Quin Snyder while he's in the league's health and safety protocols.

Jensen filled in for Snyder starting with the Jazz loss to the Timberwolves on Sunday.

"I was just fortunate not to screw it up too much," Jensen said. "But those guys, they're well trained."

"He went right, he's still going right. And we let him go right all night long." - Malone on the Nuggets' struggles with guarding Trent Forrest.