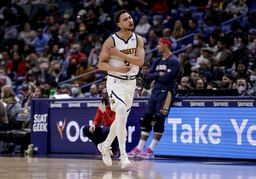 NEW ORLEANS (AP) Nikola Jokic scored 22 of his 29 points in the second half to go with 13 rebounds and 10 assists as the Denver Nuggets held off the short-handed New Orleans Pelicans 116-105 on Friday night.

"He can take over a game when he wants," said Nuggets guard Bryn Forbes, who scored 14 points. "That's what he did."

Jokic had just seven points during a closely contested first half, after which the Nuggets led 50-48. The reigning NBA MVP proceeded to score 16 points in the first 11 minutes of the second half, hitting three of the four 3-point shots in that stretch.

Denver led took an 86-78 lead into the fourth quarter and never relinquished it, going by as many as 16 when Forbes, acquired from San Antonio in a three-team trade on Jan. 19, hit a 3 to make it 103-87 halfway through the period.

"Bryn - we've got high expectations for him," said Nuggets guard Monte Morris, who scored 13 points to go with eight rebounds and seven assists. "He's a knock-down shooter whose going to acquire a lot of attention to loosen up some other guys.

"Tonight, he was able to have that next-shot mentality and he hit some big ones, stayed with it," Morris added. "That's what we ask from him. We need a shot-maker like that to expand out offense to another level."

Austin Rivers, picked 10th overall by New Orleans in the 2012 draft, added 12 points for Denver, which won its fourth straight and ninth in 12 games.

Jones said he thought New Orleans "made it pretty tough" on Jokic to score the ball and set up his teammates for parts of the game.

"But, I mean, he's a great player and he kind of made his adjustments," Jones said.

"I'm proud of once again our guys - the effort - they compete at a high level, all those guys," Pelicans coach Willie Green said. "They work their tails off. We just came up short."

Pelicans guard Devonte' Graham, who scored 15 points, appeared to hurt his left knee early in the fourth quarter. He tried to play through it before heading toward the locker room late in the game.

"He'll get re-evaluated and we'll see where he is tomorrow," Green said.

Nuggets: Jokic has 69 career triple-doubles. ... JaMychal Green, who has missed eight straight games because of COVID-19 protocols, returned to action. He played four minutes and grabbed one rebound. ... Zeke Nnaji had 11 points. ... Made 12 of 33 3-pointers (36.4%).

With Nuggets star guard Jamal Murray not yet playing this season because of his lengthy recovery from reconstructive knee surgery last year, Jokic has been able to look to Gordon to help keep Denver rolling.

"Love playing with him - his court vision, his passing ability, his passion for the game and just his ability is tremendous," Gordon, who plays small forward, said of Jokic. "Playing with somebody like that is just fun, makes the game fun.

"He plays the right way, makes the right reads. He's an unselfish, high-character guy. Just an amazing basketball player," Gordon continued. "I'm just looking to make his job easy. I'm looking at trying to return the favor. It's a great feeling going out there, knowing he has my back and I have his back."

Nuggets: At Milwaukee on Sunday in the fourth of six straight road games.

Pelicans: Host Boston on Saturday night to wrap up a two-game homestand.