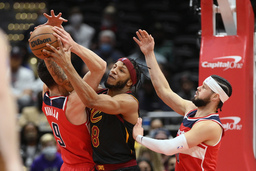 WASHINGTON (AP) Bradley Beal had 29 points and 10 assists in his first game back from the NBA's health and safety protocols as the Washington Wizards beat the Cleveland Cavaliers 110-93 on Thursday night.

Beal, in his first game action in 12 days, shot 13 of 23 from the floor in 34 minutes, then confirmed postgame that he had joined the heavy majority of NBA players in receiving his first virus vaccine.

"For me, it's selfishly I'm more concerned about my father and my family," Beal said. "The last thing I want to do is see him in the hospital on the table. So if that helps, then I'll do it. But I still have a lot of questions and concerns about it."

Kyle Kuzma had 25 points and 10 rebounds for Washington, which shot 45 of 90 from the floor (50%) and committed only eight turnovers. The Wizards (18-17) seized the lead for good midway through the second quarter and avoided falling below .500 for the first time this season.

Deni Avdija scored 13 points and Kentavious Caldwell-Pope made four 3-pointers for 12 points in his return from a virus-related absence.

"It was good to be back around the guys and be able to see that they know what we can bring and they know how the energy changes when we're around," Beal said. "It was a good feeling to have, and it was definitely a good win."

Kevin Love had 24 points and 11 rebounds for Cleveland in its first game since losing point guard Ricky Rubio for the season with a torn left ACL. Evan Mobley added 21 points as Cleveland lost consecutive games for the first time since Dec. 5-6.

"We've just got to figure it out," Cavaliers coach J.B. Bickerstaff said of managing the loss of Rubio and several short-term virus absences. "We've got to put our guys in position to be successful."

Beal made nine of 13 shots before halftime, and his dunk off a feed from Corey Kispert gave Washington its largest lead of the half, 58-51, at the break.

"He's kind of been in these situations before," Wizards coach Wes Unseld Jr. said of Beal. "He's 10 years in the NBA, I think he kind of knows how to keep his body right, keep himself ready. It's just the sign of a professional."

Washington pieced together a 16-2 run that stretched into the third quarter.

Caldwell-Pope opened the third with a 3, Beal followed with a tough leaner, Brad Wanamaker converted a three-point play and Kuzma dunked in transition as Washington raced to a 68-52 advantage.

Cavaliers: F Lamar Stevens and G/F Dylan Windler returned after a 12-day layoff spent in the league's health and safety protocols. . In Rubio's absence, rookie G Kevin Pangos made his first career start. . The Cavs had their streak of consecutive 100-point offensive performances snapped at 17 games.

Wizards: C Daniel Gafford had 11 points and nine rebounds. ... G Spencer Dinwiddie was placed into health and safety protocols before the game. . Beal picked up a technical with 8:35 to play in the third quarter. .Wanamaker made his third career NBA start and first with Washington after signing a 10-day contract via the NBA hardship exception on Thursday. . C Jamie Echenique also signed a 10-day contract via hardship exception.

With a team-store discount for the crowd on the line, this time the former Rutgers guard came up empty in three attempts from the center circle.