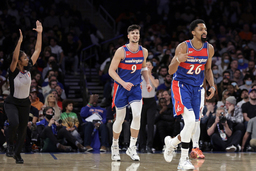 NEW YORK (AP) Washington's Kyle Kuzma had Kemba Walker's recent stellar numbers in the back of his mind and wondered why the New York guard had been buried at the end of the bench for nearly three weeks.

Walker showed off Thursday night, scoring 44 points. But the Wizards withstood both his hot hand and a fourth-quarter rally by the Knicks to beat New York 124-117.

The Knicks had pulled within two points with 2:40 left in the game, then Kuzma made consecutive 3-pointers to give Washington an insurmountable lead.

"We just made big shots," Kuzma said. "They did a good job of just keep fighting, whether it was Kemba obviously carrying them throughout the game. . We just did a good job of withstanding their punches and punching them back, as well as making timely, big shots."

Spencer Dinwiddie had 21 points and 12 assists to lead the Wizards, who were without All-Star guard Bradley Beal after he was placed on the league's COVID-19 health and safety protocols list before the game.

Dinwiddie, who has struggled at times in his first season in Washington after playing in just three games last year in Brooklyn, came into the game averaging 12.3 points and shooting 37.8% from the field.

Corey Kispert, the 15th overall pick in the 2021 NBA draft, filled in with a career-high 20 points in his first start. Kuzma added 18 points and 10 rebounds, Montrezl Harrell had 15 points and Deni Avdija chipped in 14.

All-Star forward Julius Randle had 23 points and Alec Burks added 20 for New York, which has lost 11 of 17 games at home this season.

Walker scored 28 of his 44 points in the second half.

"It felt great. It was a good time. But I really wish we could have won, to be honest," Walker said. "It's always tough when you really play well like that and don't come out on top."

He has averaged 31.3 points over his last three games after New York coach Tom Thibodeau pulled him out of the rotation and sat him for nine straight games.

"He played a monster game, but we came out with a loss," Thibodeau said. "So it's a shame to waste that type of effort with a game like that."

The Wizards went on a 12-0 run early in the third quarter to take a 71-66 lead, held New York at bay throughout the fourth quarter and extended its lead to 109-102 on a 3-pointer from Dinwiddie.

Wizards: Washington went 1-4 on its five-game trip, though Tuesday's scheduled contest against the Nets was postponed because Brooklyn had too many people out under COVID-19 protocols. ... All five Washington starters scored in double figures; Aaron Holiday had 16 points and Daniel Gafford chipped in 11.

Knicks: F Obi Toppin returned to the lineup after missing the last five games due to being on the health and safety protocols list. . New York had won its last three games against Washington prior to Thursday night's loss.

Knicks: Host Atlanta on Saturday in one of the NBA's six Christmas Day games.