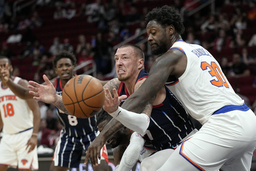 New York snapped a four-game losing streak, winning for just the second time in its last nine games. Houston has lost four of five since a seven-game winning streak.

The Knicks had four players out because of the NBA's health and safety protocols - R.J. Barrett, Obi Toppin, Quentin Grimes and Kevin Knox. On top of that, Derrick Rose started the game but left with a sore right ankle after playing just 12 minutes.

"(Quickley) hit big shots," Knicks coach Tom Thibodeau said. "We had a lot of guys step up. We've got to continue to work, defensively."

After Rose went down, Knicks rookie Miles McBride played 36 minutes, more than the 33 minutes he had played combined all season in six games. McBride, a second-round pick out of West Virginia, played the entire second half, putting up 15 points, nine assists, four steals and three rebounds in a memorable breakout game.

"It really feels great, honestly," McBride said. "It's been hard, playing a different role than I'm used to my whole life. But the coaches and the vets have been encouraging me that my moment would come."

"We needed it big," Quickley said. "Though the tough times, I feel like we've stuck together pretty well. Hopefully, we can turn this thing around because it's a long season. We just want to keep continuing to do the right thing."

New York led 57-51 at halftime. Houston won the second and third quarters and entered the fourth quarter down 84-82 before running out of gas.

Knicks: Rose "tweaked" his ankle and is day to day, Thibodeau said. . New York outrebounded Houston 40-29. Alec Burks and Mitchell Robinson both had nine rebounds. . Nerlens Noel had multiple blocks for a second straight game and for the sixth time this season. ... The Knicks have won five straight over the Rockets after losing 27 of the previous 29 meetings.

Rockets: Wood (left knee tendinitis) is expected back on Saturday against Detroit. . Tate received a technical in the third quarter after protesting a foul called on him. . Houston had another sluggish start, defensively, allowing 39 first-quarter points. The Rockets have allowed 35 or more first-quarter points in four straight games after doing so just twice in the previous 25 games.

"It's definitely crazy right now. I've been showering with my mask on." - Quickley on the recent increased number of COVID-19 cases

When asked if there's a chance some of the four players in the health and safety protocol could be available for Saturday's game in Boston, Thibodeau neglected to speculate.

"Whoever we have, let's go," Obviously, they have to go through the protocol. Safety's first. Whatever we've got to do, we'll do."

The Rockets honored former player and coach Rudy Tomjanovich for his induction into the Naismith Basketball Hall of Fame this year. He has the most coaching victories in franchise history with 503 and guided the Rockets to back-to-back championships in 1993-94 and 1994-95. Hakeem Olajuwon was present to honor Tomjanovich.

Knicks: At Boston on Saturday night.

Rockets: At Detroit on Saturday.