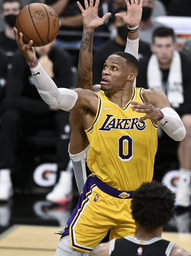 Playing before a sold-out AT&T Center crowd that loudly booed the Spurs at the free-throw line in the final minute of regulation, the Lakers won their second straight to reach .500.

"It was like a home game," said Malik Monk, who started in James' place. "I've never seen nothing like it before. It's crazy. It's a crazy feeling. It made us more comfortable and let everybody relax like we were at home."

Dejounte Murray had 21 points, 15 assists and 12 rebounds for his fifth career triple-double, and he missed a jumper in the closing seconds that would have won it for the Spurs. Jakob Poeltl added 27 points and 14 rebounds for San Antonio, and Lonnie Walker IV had a season-high 21 points.

James missed the Lakers' first road game of the season with a sore right ankle, an injury that occurred in Sunday's win over Memphis. The Lakers decided to be cautious with the early-season injury.

"We understand that with (James' absence) comes the responsibility of making guys around us better," Westbrook said. "And tonight, I thought A.D. did a great job of just being aggressive all night, miss and makes, finishing well around the basket. He was big for us tonight."

The veteran duo helped the Lakers rally from a 12-point deficit entering the fourth quarter.

"We never lost belief when we were down that we were going to win the game," coach Frank Vogel said. "Just persevered and got a huge road win."

Westbrook, acquired in an offseason trade, had 15 points in the final quarter and overtime to eclipse his previous high of 15 points with the Lakers.

"That's why we felt great about this move," Vogel said. "Last year we lost LeBron and A.D. for a long stretch, and we didn't have enough to sustain throughout the regular season and win in the playoffs. To get a guy like Russ, if one of those guys is down, we have another guy that can put up a monster night like we saw tonight. Paying early dividends in acquiring Russell."

"I'm not used to people cheering for me on the road," Westbrook said. "That is a different experience for me."

Walker made three consecutive 3-pointers that sparked an 18-3 run to close the third quarter that gave the Spurs a 97-85 lead.

"I thought we played another really good game," San Antonio coach Gregg Popovich said. "I am really proud of the guys. They went toe to toe with a talented, experienced group. If they continue to play like that, hopefully that worm will turn, and these will turn into wins. They deserve it."

The Spurs were 12 for 22 on free throws, missing all seven of their attempts in the fourth quarter. Devin Vassell missed a pair with 5 minutes remaining and was booed heavily.

Davis bumped knees in the closing minute of regulation while attempting to rebound a missed free throw. The Lakers will see how sore Davis' right knee is before deciding whether he will play Thursday at Dallas, Vogel said.

Davis gave the Lakers another scare in the opening quarter when he remained on the court clutching his right shoulder after a ferocious block of his attempted dunk by Poeltl. Davis' arm recoiled and he fell to the court from the brunt of the block, leading James to rise from his seat on the bench in concern.

Lakers: Vogel said James is "questionable" for Wednesday's game at Oklahoma City. Vogel said this injury is in a "different spot" from the right ankle injury James suffered through late last season.

Spurs: Murray is fourth in triple-doubles in franchise history, trailing David Robinson (14), Alvin Robertson (8) and Johnny Moore (6). ... Walker has made five 3-pointers in three previous games, the most recent against Milwaukee on March 20.

Lakers: At Dallas on Thursday.