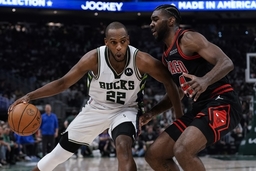 The Milwaukee Bucks escaped New York with a 109-103 win on Wednesday night, despite Giannis Antetokounmpo fouling out with a minute to go, after a go-ahead 3-pointer from Grayson Allen.

After one game on the road, the Bucks have returned home to host the Los Angeles Lakers on Friday night.

Despite fouling out, Antetokounmpo led the way for the Bucks in New York, scoring 37 points on 13-for-25 shooting while also grabbing 13 rebounds and dishing seven assists, both team highs as well.

Jrue Holiday added 22 points and Bobby Portis and Pat Connaughton scored 10. Allen finished with 11 on the night, with the game-winning shot being his only 3-pointer a game after he went 7 for 7 from beyond the arc in the first half of Milwaukee's win over Dallas on Sunday.

Milwaukee will be getting a big boost on Friday night as All-Star forward Khris Middleton is set to make his season debut, ESPN reported. The team officially listed him as probable.

Middleton has been recovering from offseason wrist surgery and has not played since Game 2 of the Bucks' first-round playoff series last season against Chicago.

Middleton is coming off a season where he was selected to the All-Star team for the third time in his career. He averaged 20.1 points per game while shooting 44 percent from the field along with 5.4 assists and 5.4 rebounds per game.

"I miss my guy. He makes the game a lot easier for me," Antetokounmpo said after the Bucks win in New York. "He's one of the best players in the league, he's a big part of who we are so we're very excited to have him back with us."

The Lakers are coming off a convincing 128-109 win at home against Portland on Wednesday with big performances from LeBron James, Anthony Davis and Austin Reaves.

James led the way with 31 points while shooting 6 for 8 from beyond the arc. Davis added 27 points along with 12 rebounds and Reaves had a very efficient night, scoring 22 points on 7-for-10 shooting. James also led the team with eight assists and seven rebounds.

The Lakers were without Lonnie Walker IV and Troy Brown Jr. on Wednesday as both were dealing with left foot soreness. Walker has been the third-leading scorer for Los Angeles behind Davis and James at 16.6 points per game.

Davis is the NBA's leading rebounder at 12.7 per game and also leads the Lakers with 26.3 points, 1.5 steals and 2.3 blocks per game. Russell Westbrook leads the team with 7.2 assists per game.

For Milwaukee, it's Antetokounmpo leading with 31.3 points and 11.5 rebounds per night. Holiday leads in assists and steals at 7.2 and 1.6 per game, respectively, while Brook Lopez continues to lead the NBA in blocks with 2.8 per game.

For Los Angeles, Friday marks the start of a six-game Eastern Conference road trip. They will play in Washington, Cleveland, Toronto, Philadelphia and Detroit before heading back home.

"I think this team is starting to jell on both ends of the floor," Davis said. "You want to feel good going into a tough road stretch. All these teams are playing well."