Warriors aim to get back on track in rematch with Nuggets 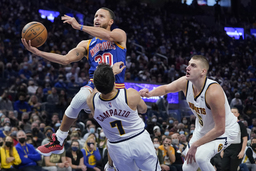 The Denver Nuggets have struggled to hold onto big leads lately, and it cost them a home win against Charlotte last week.

They quickly learned how to recover from those moments in the past two games, including a win at Golden State on Tuesday night. The Warriors get a rematch when the teams meet in Denver on Thursday night.

The Nuggets led by 17 at the Los Angeles Clippers on Saturday, fell behind by nine and then recovered to win 103-100. Wednesday they led Golden State by 24 at halftime and scored just 29 points in the second half, but it was enough for an 89-86 win.

Thursday is a chance to get a less dramatic win against the team that has surprised everyone with its fast start. The Warriors have the best record in the NBA, so losing at home to a team without several key players seemed unlikely, but Denver pulled it off.

"I couldn't be more proud of our guys," Nuggets coach Michael Malone said after the win. "I thought Will Barton, down the stretch, made a couple of big, big plays."

Denver got its usual stellar game from Nikola Jokic, who just missed out on his third straight 20-point, 20-rebound game, but the key was the defense played on Steph Curry. Nuggets players held him to just two points in the first half, and he didn't hit his first 3-pointer until the last seconds of the third quarter.

It was the 3,000th of his career, but he finished just 5-for-14 from behind the arc. Golden State played without Draymond Green due to health and safety protocols, and he will be out Thursday, too, and the team missed his playmaking and defense.

It also helped the Nuggets focus their defense more on Curry, a strategy that paid off.

"It's never one person with a great player, and obviously, Steph is one of the greatest to ever do it," Malone said. "When you're guarding against a great team and a great player, you have to alter your defense. You can't play him with the regular defense that we use most nights."

The Warriors did get Andrew Wiggins back from health and safety protocols, but Green's absence was a factor. Coach Steve Kerr said it shouldn't have mattered.

"Denver is without half of their team with injuries and everything else, so it's not an excuse. The whole league is missing people," he said. "We've just got to get better in terms of our offensive execution while Draymond is out. Obviously we run so much of our stuff through him."

Nuggets point guard Monte Morris sat out Tuesday with a sore knee, and his status for Thursday is unknown. Aaron Gordon missed his third straight game with a hamstring injury and could sit out his fourth.

Thursday's game is a quick stop at home for Denver before it heads out for a two-game trip through Texas to play Houston and Dallas, while Golden State will travel to Utah on Saturday night.