Baker to return as Houston Astros manager for 2023 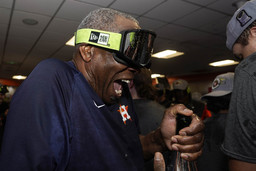 HOUSTON (AP) For years, as Dusty Baker chased his first World Series title as a manager, the former big league outfielder would always say if he won one he'd like to win two.

Baker will get a chance to do just that after he agreed to a one-year contract with the Houston Astros.

"How many times in your life do you say something and then have the opportunity to fulfill it," Baker said Wednesday. "I wasn't just talking. I meant what I said. I love keeping my word. So, hey man we've got a chance to win back to back and this is what I'd like to do."

The 73-year-old Baker earned his first World Series championship as a manager in his 25th season as a skipper when the Astros beat the Philadelphia Phillies in six games Saturday. The days since then have been a "whirlwind" for Baker, who has been packing to head home to California and said he has about 1,500 texts and countless emails he hasn't had a chance to read.

With everything he has going on, it was good that it didn't take long for Baker and team owner Jim Crane to agree to a new contract. Crane said the discussion was a quick one, lasting only about 15 minutes.

"He wanted another year so that's what we gave him," Crane said. "He's a legend and he's really done a lot for the team."

Things aren't so straightforward for general manager James Click, whose contract also expired at the end of the season. Click said Tuesday night at the general managers' meetings in Las Vegas that he was having discussions about his future with Crane.

"We're in discussions and when he gets back, we'll complete those discussions," Crane said.

Baker also won the World Series as a player on the 1981 Los Angeles Dodgers. Although he always said he wanted to win more than one title as a manager once he won one, he did take a little time to reflect after Saturday's win and make sure he wanted to return for another season.

"I'd be going against what I was destined to do if I did anything else at this point in time," he said. "I prayed on it and my answer was: `Hey man, get your butt back out there and manage again.'"

Click and Baker both joined the team in 2020 to replace general manager Jeff Luhnow and manager A.J. Hinch, who were fired in the aftermath of Houston's sign-stealing scandal.

Crane raved about Baker's strong presence in leading the team and trying to rebuild the image of the franchise after the cheating scandal.

"The day he walked in the door, he was very calm and certainly has a ton of experience," Crane said. "And he did a great job in kind of settling things down, getting everybody focused on playing baseball and winning games."

Baker took over for the COVID-19-shortened season. The Astros squeaked into the postseason as an AL wild card before heating up in the playoffs and coming one win shy of reaching the World Series.

The Astros won 95 games in 2021 and Baker made his first trip to the Series since 2002 with the Giants but came up short again as Houston fell to Atlanta in six games.

This season Houston won 106 games for the second-best record in franchise history. It captured its second World Series title and first since the scandal-tainted 2017 championship.

Ace Justin Verlander is expected to decline his $25 million player option for next season and become a free agent Thursday.

"We've been talking to him and we're working on it," Crane said. "We're going to do our best to try to keep him."

Baker is 230-154 in his three regular seasons in Houston. He is 28-14 in the postseason with the Astros, tying Hinch (28-20) for most playoff wins in franchise history.

Baker, who turns 74 in June, is the oldest manager to win a World Series. Despite his age, he's not ready to say next season will be his last.

"I've got work to do," he said. "You can't be satisfied with where you are or else you'll never get past where you are right now. My thing is to win this pennant again next year and then I'll tell you where I am next year at this point in time."

Whenever he does hang it up, he has a strong case for the Hall of Fame. Baker is the 12th manager in major league history to reach 2,000 wins and the first Black man to do it. Ten of the 11 other managers who have accumulated at least 2,000 wins are in the Hall of Fame. Bruce Bochy (2,003), who isn't yet eligible, is the only exception.

Baker said he isn't thinking about that possibility yet with so much work to be done.

"I love winning," he said. "I'm just telling you, I love winning probably more than anything else. I'm spoiled by winning. And so that's what I plan on doing - doing some more winning."

He was, however, tickled to learn that some of his toothpicks are already headed to the Hall of Fame along with his Game 2 jersey and Game 6 wristbands as artifacts from the World Series.

But he joked that the fact that his affinity for chewing toothpicks during games had become so well-known that the Hall of Fame wanted some didn't take away the sting from another incident with his toothpicks.

"My agent, a few years ago contacted them to see if I get a toothpick endorsement," he said. "And they told me they don't need me to sell toothpicks because they're going to sell them anyway. So that was very humbling."