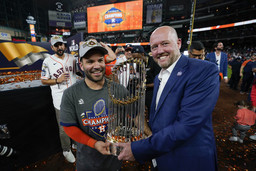 The Astros scheduled a Wednesday news conference in Houston that Click didn't plan to attend and said he only recently had been made aware of. Click's contract expired on Oct. 31, between Games 2 and 3 of the Series, and Click wouldn't discuss whether he and manager Dusty Baker had been offered one-year deals or whether he would accept.

Click had spent 14 seasons with Tampa Bay, the last three as vice president of baseball operations, when he was hired by Astros owner Jim Crane in March 2020. Click and Baker were brought in after general manager Jeff Luhnow and manager A.J. Hinch were fired for their roles in Houston's 2017-18 sign-stealing scandal.

Click didn't find it unusual to be working during the Series without a contract - Yankees GM Brian Cashman also has an expired agreement but has expressed confidence a new deal will be struck at some point.

"When your contract ends, you don't become a free agent," Click said. "It's not that you're unemployed. It's just you can go to an at-will employment situation."

Click answered indirectly when asked whether autonomy over baseball operations was an issue.

"All of us always want to have areas of responsibility in areas that we can call our own, in areas that we can take pride in," he said. "Inevitably in any of these jobs, these decisions are multimillion dollar decisions, and ownership is going to be involved. It's just a question of degree."

Now 44, Click has been in baseball since he started with Tampa Bay as an intern in 2005. The uncertainty of his job status didn't detract from his enjoyment of the title.

"That's one of the most unbelievable experiences that I've ever had in my entire life," he said. "I got here and so many people who haven't been lucky enough to win a title came up to me and they said: `Does it live up? Is this worth it, what we all go through, how much time we spend away from our families?'" And I will tell you unequivocally, yes, it totally lives up. And so it was nice to be able to see a lot of old friends and people who are grinding as hard as I am and harder than I am and be able to say that when their time comes that the juice is worth the squeeze."