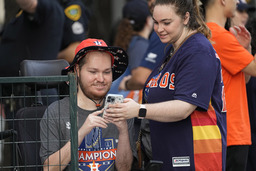 The city said in a news release that the downtown parade after the Astros' 2017 win brought in about 1 million people, and organizers expected about that many people to attend Monday's parade.

Saturday's win gave the Astros' 73-year-old manager Dusty Baker his first title in 25 seasons as a manager, the last three in Houston.