Padres' season ends in NLCS with bunch of what-if questions 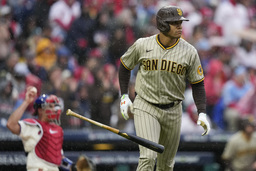 PHILADELPHIA (AP) The San Diego Padres will head into the offseason with a whole bunch of what-ifs?

What if manager Bob Melvin had brought in closer Josh Hader to face Bryce Harper? What if Trent Grisham had swung away? What if Fernando Tatis Jr. had been eligible to play?

Manny Machado, Juan Soto and the Padres saw their season end Sunday, beaten in Game 5 of the NL Championship Series when Bryce Harper's two-run homer in the eighth inning gave the Philadelphia Phillies a 4-3 win.

"We tried, we fought, we came up short," Machado said. "We want to be on the opposite side of this. A good team beat us. They just won, fair and square."

The Padres, who started playing in 1969 as an expansion team, are still seeking their first World Series title. They had their chances on Sunday to at least get the series back to San Diego for a Game 6 on Monday.

Soto's solo homer in the fourth got the Padres on the board against Phillies ace Zack Wheeler. San Diego took a 3-2 lead in the seventh when pinch-runner Jose Azocar scored on the third of reliever Seranthony Dominguez's wild pitches in the inning.

But after reliever Robert Suarez gave up J.T. Realmuto's single to begin the eighth, Harper hit his fifth home run of the postseason.

"Harper had a huge moment there," Machado said. "You just have to tip your hat."

Melvin elected to stay with the right-handed Suarez against the lefty Harper rather than bring in Hader, the hard-throwing lefty.

"We were going to look for four outs. We were trying to split it up with he and Suarez. But, look, we've got a lot of confidence in Suarez, came in and did a great job the inning before. We just fell a little bit short there," Melvin said.

"This is a really good hitter, obviously. He gets ahead of him with two strikes. I couldn't see in and out. It looks like he's locating away and trying to keep him in the ballpark there, maybe throw it by him. And he got the good piece of the bat on the ball," he said.

Melvin said he didn't consider bringing in Hader to begin the eighth.

"He wasn't even ready at that point. It would have been less than six outs for him. We would have tried to get through the inning with him. At that point in time, I had confidence in Suarez," he said.

In the ninth, the Padres drew a pair of one-out walks from David Robertson. Phillies manager Rob Thomson summoned Ranger Suarez for his first relief appearance of the year.

Trent Grisham, who had gotten several big hits earlier this postseason, bunted the first pitch and Suarez threw him out. Instead of a bunt hit to load the bases, the sacrifice put runners on second and third, but with two outs.

"Yeah, grass is wet. Tough lefty on the mound. Puts us in a position to -- I talked to him before it to -- first baseman's back, drag it over there and we've got a chance, with a righty up behind him, to potentially knock in the go-ahead run too. So I think it's a decent play for sure, Mevlin said.

"Look, this is what we thought was best for it. He's a good bunter, and it got us in a position to potentially, like I said, knock in the winning run," he said.

Austin Nola, who delivered a key hit against his brother, Phillies pitcher Aaron Nola, in San Diego's Game 2 win, was up next. He lifted an easy flyball to end it.

The Padres reached the postseason without Tatis, their slugging star shorstop was injured to start the season and then suspended after a positive test for a banned substance. Tatis never played a game for San Diego this season.

After dispatching the the 101-win Mets in three games in New York in the NL wild-card series, San Diego toppled the 111-win Dodgers in the NL Division Series in five games to reach the NLCS for the first time since 1998.

The Padres had home-field advantage against the Phillies, but could only manage a Game 2 victory at home.

"It's tough right now. I mean, that one stings," Melvin said.

Melvin was short one of his key pieces all season in Tatis, who fractured his left wrist in an offseason motorcycle accident. Just when Tatis appeared close to returning, he was suspended 80 games for the positive test for a performance-enhancing substance.

"We dealt with a lot all year, injuries, guys going down, guys missing, but everyone kept fighting," Machado said.

The Padres expect to get Tatis back early next season and look to build on what they did this season.

"You see how far we made it, it's pretty impressive," said Soto, whom the Padres acquired in a blockbuster deal at the trade deadline. "You see how good we are and how much damage we can make. We still believe in ourselves. We're going to come back next year stronger and ready to go."