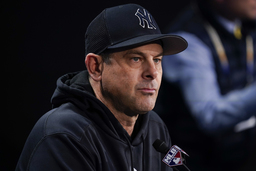 That year, Boston became the only team in major league history to overcome a 3-0 deficit in a best-of-seven postseason series, winning four straight games against the Yankees in the ALCS and going on to its first World Series title since 1918.

"We watched that video today, oh yeah," Boone said. "We sent it out to all our coaches and (got) it out to our players."

Boston trailed 4-3 in the ninth inning of Game 4 at Fenway Park when Mariano Rivera walked Kevin Millar leading off, pinch-runner Dave Roberts stole second on the next pitch after three pickoff attempts and Bill Mueller hit a tying single. David Ortiz hit a game-ending home run in the 12th, Boston won in 14 innings the next day on Ortiz's RBI single and then the Red Sox won twice at Yankee Stadium.

None of the 25 previous teams to trail 3-0 had come back to win.

"Look, we still have time," Boone added. "We're obviously now as far up against it as you can be and not in a great spot, but you can't get ahead of yourselves, either. We've just got to go out and it starts with the first inning, trying to win pitches and then try and ultimately win a game and at least put a little pressure on them and then start to see what can happen."

Boston is the only one of 39 teams that trailed 3-0 and came back to win. Thirty clubs that were up 3-0 completed sweeps.

"Eduardo had Big Papi on. He FaceTimed him in here, so I said `hey' to him," Boone said. "He had some advice."