Rangers still not winning after 1st year with Seager, Semien 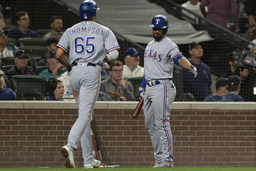 ARLINGTON, Texas (AP) For Corey Seager, it was a weird feeling being at his locker in the Texas Rangers clubhouse after the regular-season finale knowing there were no more games to play.

That has become all too common for the Rangers, who have now missed the playoffs six years in a row - even after their record spending spree last offseason that included an investment of a half-billion dollars to sign free-agent middle infielders Seager and Marcus Semien to long-term deals.

"It's just been a strange day because you're kind of expecting what's next, and it's not there," said Seager, the shortstop whose first seven big league seasons were with the Los Angeles Dodgers, who went to three World Series and never missed the playoffs in that span. He was World Series MVP two years ago.

There were never any expectations that Texas would go from 102 losses last year immediately to a title. But the Rangers never had a winning record at any point this season, the peak being 24-24 at the end of May. They finished 68-94, only eight wins more than 2021.

Fourth-year manager Chris Woodward and president of baseball operations Jon Daniels, the longtime executive who was general manager of World Series teams in 2010 and 2011, were fired days apart in mid-August.

"Bottom line is we're not good, and we haven't been good for six years," primary team owner Ray Davis said the day he fired Daniels. The current ownership group bought the team in 2010, soon before the franchise's first World Series appearance.

While the Rangers went 17-31 for interim manager Tony Beasley, young players got extended looks over the final third of the season. Rookies like speedy outfielder Bubba Thomson (18 stolen bases in 55 games) and infielder-outfielder Josh Smith got regular playing time, and touted prospect third baseman Josh Jung made his MLB debut with 26 games the final month.

"We are not as far away, I think, as people think we are," said Beasley, the longtime third base coach.

Beasley, who once managed Rangers GM Chris Young in the minors, will be a candidate in the managerial search. Young also will also be looking to improve the roster, with Davis saying the needs are obvious.

"We need a couple of front-end starters and we need a middle-of-the-lineup bat," Davis said. "I don't plan on spending as much money as we did last offseason, but we plan on spending some money."

Seager hit a career-low .245, but finished fifth in the American League with a career-best 33 homers in the first year of his $325 million, 10-year contract. After his $175 million, seven-year deal, Semien was batting .193 without a homer on June 1 before getting on track to finish with a .248 average and 26 homers. Both had 83 RBIs.

Left-hander Martin Perez (12-8, 2.89 ERA) was an first-time All-Star in his return to Texas after three years away. He is going into free agency again after a $4 million, one-year deal at the start of spring training last March, and hopes to return.

Jon Gray was 7-7 with a 3.96 ERA in his Rangers debut, after his $56 million, four-year deal to be their No. 1 starter came at the same time Seager and Semien signed. The right-hander was limited to 24 starts because of three injury list stints, but did have five starts at end of the season after missing six weeks with an oblique strain.

"Feel a lot better about it mentally, just getting out there and showing that I can go out there and be the same guy again," Gray said.

The 35 one-run losses for the Rangers were the most in franchise history. They lost 18 other games by two runs.

Adolis Garcia and Semien, whose 25 stolen bases were 10 more than he had ever had, were the first Texas teammates to both have 25 homers and 25 stolen bases in the same season. The Rangers led the majors with 128 stolen bases. Garcia hit .250 with 27 homers, 101 RBIs and 25 RBIs.

First baseman Nathaniel Lowe also had 27 homers, giving the Rangers four players with more than 25 homers. Lowe batted .302 to become the team's first qualifier to hit .300 since Elvis Andrus and Adrian Beltre both did in 2016.

Co-pitching coaches Doug Mathis and Brendan Sagara will not return to the major league coaching staff. The Rangers said Thursday that Sagara was offered a different position in the organization, but Mathis wasn't. The remaining full-time coaches were offered the opportunity to return, with roles to be determined when a new manager is in place.