Amid the losses, Pirates believe end of overhaul is in sight 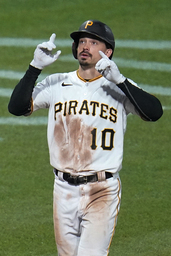 PITTSBURGH (AP) The pepper in Derek Shelton's salt-and-pepper hair is almost gone. Three years of losing will do that, even if it's primarily by design.

"It can make you gray like it's done to me a little bit," Shelton said.

The transformation atop Shelton's head is almost complete following a 62-100 finish in 2022, the first time in nearly 70 years the Pirates have dropped 100 games in consecutive seasons. Shelton's players are optimistic the franchise's transformation from reclamation project to contender is not far behind.

"It's definitely tough, but it's part of the understanding that you're going to take your lumps when you have the young talent," said closer David Bednar, an All-Star thanks to a dominant first half before health issues down the stretch curtailed his breakout season. "But I think also, on the flip side of that, that's the only way to learn."

There have been lessons aplenty to absorb. Rodolfo Castro found out the hard way to check his pockets to make sure his phone isn't in one of them before he steps into the batter's box. Ke'Bryan Hayes earned a talking to after deciding in the middle of a play - albeit one the third baseman was not involved in - was the right time to pop a few sunflower seeds in his mouth.

Shelton believes getting caught up in the bouts of immaturity, however, is to miss the point.

"We have a process and ... I trust the process," said Shelton, who will return next spring. "Ben was pretty clear when he got hired what the process was going to be. And, you know, sometimes it doesn't happen as quickly as everyone wants."

Ben is Ben Cherington, the general manager who took over three years ago and made it clear his goal was to restock a system bereft of high-end talent and go from there. While some of those moves - like the drafting of first-round picks Henry Davis, Nick Gonzales and Termarr Johnson - are still a ways away from panning out, others have started to bear fruit.

Towering 6-foot-7 shortstop Oneil Cruz reached the majors to stay in June and tantalized with a combination of speed, power and athleticism (17 home runs in 83 games) while still looking very much like an unfinished project (a team-high 17 errors on a team that finished with 121, highest in the majors).

Pitchers Roansy Contreras, Johan Oviedo and Luis Ortiz showed promise and very live arms for a starting rotation in dire need of both. Outfielder Jack Suwinski hit a surprising 19 home runs - tied for most among National League rookies - while wearing No. 65, a number that is typically given to minor-league players used as fill-ins though he was a regular by the end of the season.

Suwinski is among the prospects who came through the system together who talk openly about being the core that makes baseball matter again in Pittsburgh.

"I think this group is super talented," Suwinski said. "And I think that we're going to kind of keep trending upwards and get better as we go."

Pittsburgh used a staggering 68 different players this season. While injuries played a factor, some of the churn was intentional. The major-league roster has been populated by placeholders at certain positions (first base chief among them) while the club focused on development at the lower levels.

Shelton expects there to be fewer coming and goings in 2023.

"We're getting closer to having that group of players that we've either acquired or developed in (the clubhouse)," he said.

The Pirates saw a significant jump in home runs this season, hitting 158 after managing a major-league-worst 124 in 2021. That was one of the few offensive metrics that were kind to a club that finished next-to-last in run differential (minus-226).

A number just as problematic? Attendance. The Pirates averaged 15,524 fans at PNC Park, the lowest in the 21-year history of one of baseball's jewels.

While Pittsburgh's starting staff managed just 21 victories - by far the fewest in the majors - there were signs of development, particularly by Mitch Keller.

The addition of a sinker helped Keller post a respectable 3.91 ERA. He was particularly effective in the second half, going 2-5 with a 3.09 ERA and allowed two runs or fewer in his each of final seven starts.

Keller figures to be the anchor of the rotation in 2023, a group that figures to be more competitive next season with Contreras and perhaps Oviedo and Ortiz fighting among a group that will also include JT Brubaker, Zach Thompson and Bryse Wilson.