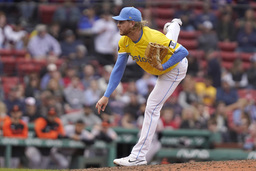 A Canadian requirement that prevents foreign nationals who aren't vaccinated against COVID-19 from entering the country expires Saturday, the first day of October.

Throughout the season to date, unvaccinated baseball players have been placed on the restricted list, where they are not paid and do not accrue major league service time.

Red Sox manager Alex Cora said Ort would join the Red Sox in Toronto on Saturday, but didn't know what the corresponding roster move would be.

"We'll make a decision based on where we're at, pitching-wise, and how we feel we're going to use guys the rest of the season," Cora said.

The restricted list was used 48 times by 46 different players this season, with Boston right-hander Tanner Houck and Tampa Bay Rays right-hander Brooks Raley each missing two trips to Canada. Houck is currently on the injured list because of a sore lower back.

Duran decided to get vaccinated after he missed a three-game series in Toronto in June.

Kansas City had a league-high 10 players absent for a Toronto series right before the All-Star break. That group included Whit Merrifield, who later got vaccinated and was traded to Toronto at the deadline.

Baltimore outfielder Anthony Santander and left-hander Keegan Akin also got vaccinated after missing a series in Canada. The Orioles brought complete rosters to Toronto for series in August and September.

The Yankees, Rangers and Astros all brought full vaccinated rosters to Toronto this season. New York made three trips to Toronto, while Texas and Houston each came once.

All Blue Jays players and staff have had to be vaccinated the entire season in order to meet requirements to enter the United States.