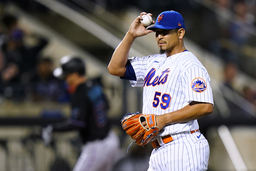 NEW YORK (AP) Carlos Carrasco had another short start Tuesday night, lasting just three innings as the New York Mets fell into a first-place tie in the NL East with a 6-4 loss to the Miami Marlins.

The Marlins closed out New York not long after Atlanta completed an 8-2 victory over Washington. The Mets and Braves are both 97-58 with seven games left.

The Mets have held sole possession of the division lead for all but four days this season. They were up by 10 1/2 games on June 1.

"This is fun - this is really, really fun, being in a race like this," said first baseman Pete Alonso, whose three-run homer made him the first Mets player with multiple 40-homer seasons. "Tomorrow's another chance for us to be great and we just want to continue to play the great baseball we've been playing all year."

The Mets and Braves are scheduled to play a three-game series this weekend in Atlanta, though Hurricane Ian could force at least one postponement or a relocation of the series.

"I know that we've got a big series coming up with a lot of stuff," Alonso said. "But realistically, we're just ready to focus up for (Wednesday)."

The Marlins scored twice against Carrasco (15-7) in the first, when Bryan De La Cruz delivered a sacrifice fly and Brian Anderson raced home on a wild pitch. They added two more in the third, when JJ Bleday hit a 339-foot homer just over the right-field wall.

Carrasco and Mets manager Buck Showalter both lamented the right-hander's inability to find his curveball to go along with his fastball and changeup.

"Some guys can get by with the two, but that heavy a right-handed lineup you probably need it," Showalter said. "Just kept waiting for him to get it going."

Carrasco allowed six hits and walked one while throwing four or fewer innings for the fourth time in his last six starts, a stretch in which he has a 4.94 ERA. The 35-year-old pitcher was sidelined from Aug. 16 through Sept. 3 with a strained left oblique.

"I missed a lot of spots," Carrasco said.

The Marlins answered Alonso's homer in the fifth, when catcher Jacob Stallings hit a two-run single off Trevor Williams. The Mets had a baserunner in each of the next four innings but scored only in the eighth, when Jeff McNeil singled with two outs and came around on three balks by Richard Bleier as the left-hander pitched to Alonso.

Dylan Floro struck out all three batters in the ninth to earn his eighth save and preserve the win for starter Pablo Lopez (10-10), who allowed five hits and struck out five over six innings.

Lopez, who entered with an 11.34 ERA in four starts this year against the Mets, retired the first nine batters he faced before Brandon Nimmo singled.

"I can't tell you how good this one feels," Lopez said. "I've been looking forward to this one. And just being able to put together a good start like Jacob and I did is very fulfilling."

Bleier hadn't been called for a balk in his first 303 big league appearances before he became the first player to commit three balks in an inning since Jim Gott for the Pittsburgh Pirates against the Mets on Aug. 6, 1988.

"Words cannot describe what happened in that inning on my end," Bleier said. "I don't know. It was wild."

Bleier grew increasingly agitated with each balk call. Following the run-scoring balk, Marlins manager Don Mattingly sprang out of the dugout and was ejected following a heated argument with the entire umpiring crew.

"I know I'm gone the minute I walk out of the dugout," Mattingly said. "It's just ridiculous. I guess you see something new every day in this game and that was new for sure."

"It's the same move I've been doing for 300 innings and here we are," Bleier said. "Maybe I was balking. I watched the video. I completely disagreed, but I'm biased, so I don't know."

Mattingly, who announced Sunday he would not return to the team for the 2023 season, exchanged lineup cards and a handshake at home plate before the game with Showalter, who managed Mattingly when the latter was the Yankees' captain from 1992-95.

"I learned a lot from Buck," Mattingly said. "His organization (skills) and the guys he picks and how he builds culture. He's sharp."

Mattingly said Sunday he's looking forward to spending time with his family in Indiana but that he hoped to return to baseball at some point - a sentiment Showalter shared as well Tuesday afternoon.

"The game's better with him in it and hope he continues," Showalter said. "He's as good a human being as he is a player and coach and manager. And that's saying a lot."

Marlins: DH Garrett Cooper broke his left hand when he was hit by Williams' pitch in the fifth. . INF Joey Wendle (left hamstring) is expected to return to the active roster when Miami begins a three-game series against Milwaukee on Friday night. . OF Avisail Garcia (left hamstring) went 1 for 4 with an RBI in his second rehab game for Triple-A Jacksonville. Mattingly said he hoped Garcia could also return Friday.

Mets: OF Terrance Gore had a cracked molar repaired. "He can still run," Showalter said dryly of the pinch-runner extraordinaire, who has 43 stolen bases and just 80 plate appearances in his eight-year career.

Marlins: LHP Jesus Luzardo (3-7, 3.57 ERA) has allowed two runs or fewer in seven of his 10 starts since returning from an almost three-month stint on the IL due to a forearm injury.