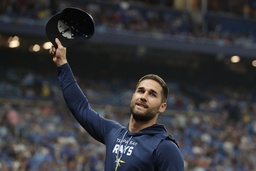 The 32-year-old Kiermaier, in the final season of a $53.5 million, six-year contract, faces an uncertain offseason following season-ending left hip surgery nearly two months ago. The Rays have a $13 million option for 2023, which they will likely decline in favor of a $2.5 million buyout.

Kiermaier said no when asked if he thought the video tribute felt like a goodbye.

"It was more of an appreciation to me," Kiermaier said before the Rays' regular-season home finale Sunday. "Being realistic, I don't know if that was my final Saturday game for me here in the regular season. A lot of unknowns. I don't know if I will be putting on this uniform and taking that field again, or if I'll be coming into this building on the other side, which is such a weird thought."

"He mentioned, `Hey, get healthy and we'll revisit talks,'" Kiermaier. "Hopefully the Rays, other teams check in. As a player, you just want to feel wanted. For me, I know I can help a team win. Give me a healthy body, and I'm going to work this offseason to get my speed back, my explosiveness."

"What I like with all this, it's all up to me," Kiermaier added. "It's up to me to control my own destiny. I'm locked in, I'm focused. I've got to make it happen."

The three-time AL Gold Glove winner is making progress in his rehabilitation program.

"Seven and a half weeks in, I'm doing agility now, doing quite a bit," Kiermaier said. "Jogging is the next big thing for me, but I'm able to do a lot of footwork and getting a lot of strengthening back. I feel awesome. As the weeks go by, the more I'm able to do but it's about as smooth sailing as it could be right now to this point."