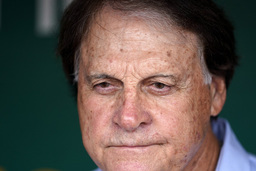 La Russa, who turns 78 on Oct. 4, had "additional testing and medical procedures over the past week," the team said Saturday, and doctors have directed the Hall of Famer to stay away from managing for the rest of the season.

"Right now the focus is on his health," general manager Rick Hahn said when asked if La Russa still wants to manage.

La Russa left the White Sox before an Aug. 30 game against Kansas City to deal with a heart issue. He rejoined the club in Oakland on Sept. 11 and flew back to Chicago for a two-game series against Colorado.

La Russa was waiting for clearance to return to the dugout and managing during games. Chicago lost to Detroit 7-2 on Saturday night.

"We are going to continue to follow his wishes of keeping much of the specific details and his personal information quiet," Hahn said Saturday. "I did speak to him on the way in this morning, and he had no issue with us letting everybody know that there is a treatment protocol in place that he plans on adhering to. As a result, he won't be managing the remainder of this season.

"As for the inevitable question, `Well what does that mean for next season?' We are going to finish up this season first and then address everything when it's appropriate to turn the page at the end of this year."

Cairo said he spoke to La Russa for about 15 minutes on Friday night, and he was doing well. When asked if he wants the managerial job, Cairo said he is focused on the current season.

"I talked to the players today, I let them know and it's 11 more games," said Cairo, who was the bench coach. "Let's finish strong."

The White Sox won 10 of their first 14 games under Cairo but have dropped five straight to tumble to a season-high nine games behind AL Central leader Cleveland.

The White Sox began the season with high hopes of defending their division title under La Russa.

"He's a Hall of Famer," outfielder Eloy Jimenez said. "He impacted every way in the clubhouse. For us, he wasn't available to be there for those games that we were playing, and he's battling for his life, so it's not good. That's all I can say right now."

"These are stressful jobs; you can't take your health for granted," Hinch said. "We as men in this sport often don't ask for help, so I'm glad he's good. On the managing side of it, he's a Hall of Famer. He's done everything any of us who have ever had this position would dream of doing. His accomplishments across different teams, different leagues, different jobs in his role in baseball and the number of players he's touched, staff he's developed, his resume speaks for itself, and his impact in the game should be forever respected."

The White Sox also made several roster moves. Outfielder Luis Robert will be shut down for the season because discomfort in his sprained left wrist has worsened after he was hit by a pitch, Hahn said. Chicago placed Robert on the 10-day injured list Saturday. Outfielder Mark Payton was recalled from Triple-A Charlotte.

Reliever Joe Kelly was reinstated from the family medical leave list, and left-hander Tanner Banks was optioned to Charlotte.

Shortstop Tim Anderson could return this season after he went on the injured list for a sagittal band tear in his left middle finger Aug. 9, Hahn said. Anderson was expected to miss six to eight weeks.

"It's really a question of does it make sense at this point in the year to try to rush into that two-week window or let nature take its course and send him into the offseason fully healed," Hahn said.

Right-hander Michael Kopech's right shoulder is doing well, but the White Sox have discussed when a cyst in his knee will be removed, Hahn said. Kopech went on the 15-day injured list for right shoulder inflammation Sept. 17.