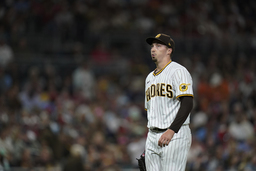 SAN DIEGO (AP) Albert Pujols of the St. Louis Cardinals grounded a single to right field with two outs in the seventh inning to break up a no-hit bid by Blake Snell of the San Diego Padres.

The Padres led 1-0 at Petco Park on Wednesday night.

The left-handed Snell had shut down Pujols and the NL Central-leading Cardinals until the 42-year-old slugger, who is two shy of 700 home runs for his career, punched a base hit to right on a 3-1 pitch, Snell's 107th of the game.

Until then, the left-handed Snell had allowed only two runners, issuing walks to Nolan Arenado leading off the second inning and Paul Goldschmidt with one out in the fourth.

He had retired Pujols twice, on a strikeout and a groundout.

Juan Yepez followed with a single before Snell struck out Paul DeJong to tie his career-high of 13.