Judge 1 away from AL home run record, Pujols needs 2 for 700 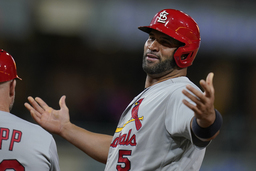 A look at Aaron Judge of the New York Yankees and Albert Pujols of the St. Louis Cardinals as they approach major home run milestones:

Tuesday's Game: Hit his 60th home run, keying a five-run rally in the ninth inning that led the Yankees over Pittsburgh 9-8.

Current HR Pace: Judge is on pace to hit 66.1 home runs this season.

Next HR: Judge's next home run would tie him with Roger Maris for the AL record. Maris hit 61 for the Yankees in 1961.

Tuesday's Game: Hit two singles for the Cardinals in a 5-0 loss to the Padres.