Montas gets shoulder injection, may not start in playoffs 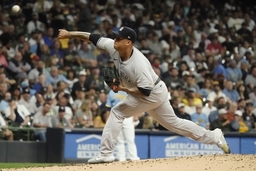 NEW YORK (AP) Yankees pitcher Frankie Montas received a second cortisone injection in his ailing right shoulder and went on the injured list Tuesday, putting his rotation position in doubt for the postseason.

Montas mentioned the shoulder issue to the Yankees after Friday's start in Milwaukee, when New York failed to hold a 5-0 lead. He is 1-3 with a 6.35 ERA in eight starts since the Yankees acquired him from Oakland for four prospects in an Aug. 1 trade, leaving him 5-12 with a 4.05 ERA in 27 starts this season.

Montas was diagnosed with shoulder inflammation and was given the injection on Monday.

"I'm going to wait a couple days to start playing catch and go from there," Montas said Tuesday. "Let the cortisone shot ... work the magic."

Montas had his first cortisone shot in early July and did not pitch between July 3 and 21.

"It did work, just probably rushed it a little bit," he said.

Montas was placed on the 15-day injured list retroactive to Saturday, and New York activated outfielder Harrison Bader. The earliest Montas could be activated is Oct. 2, leaving him at most one start before the playoffs.

"We'll just see how the recovery goes here over the next week or 10 days and then we'll see where we are from a calendar standpoint, how many pitches we can get him up to," Yankees manager Aaron Boone said. "It might be hard to to get the pitch count back up to a certain point."

Right-hander Luis Severino is scheduled to start Wednesday against Pittsburgh after recovering from a strained right lat that has sidelined him since July 13. He joins a rotation that includes Gerrit Cole, Nelson Cortes and Jameson Tallion and Domingo German.

Severino estimated he would throw at most 65 pitches against the Pirates, then increase by 10 to 15 in each following start. He isn't worried about length ahead of the playoffs.

"You know how the postseason is - you got two guys on base, somebody's warming up already," he said. "It's not like I'm going to throw 100 pitches."

Reliever Scott Effross, out since Aug. 20 with a strained right shoulder, will either be activated Wednesday or throw a second minor league rehab outing.

Infielder DJ LaMahieu, sidelined since Sept. 4 by right second toe inflammation, could be activated during the current homestand.

Matt Carpenter, out since breaking his left foot on Aug. 8, will have X-rays this week to determine whether he can increase workouts.