Boston's Xander Bogaerts out for Monday's game vs Rays 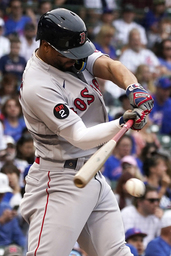 BOSTON (AP) Red Sox shortstop Xander Bogaerts will not be in the starting lineup for Monday's game against Tampa Bay after leaving a day earlier with a cut on his left thigh that required seven stitches.

"He texted me early. He was my wakeup text," Cora said. "It was a big cut. Hopefully, he feels better tomorrow, and we can use him."

Bogaerts was injured in the seventh inning of Sunday's 4-2 victory at the Chicago Cubs when he covered second and Willson Contreras' spikes slid into the shortstop's left leg as Bogaerts tagged him out.

Bogaerts is hitting .318. The Red Sox open a three-game series against the Rays before hosting the AL East-leading Yankees for a four-game series that starts Thursday.