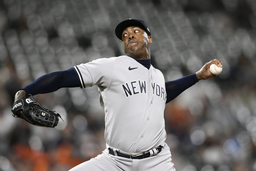 CLEVELAND (AP) The New York Yankees reinstated reliever Aroldis Chapman from the injured list Friday after the left-hander missed more than a month with tendinitis in his left Achilles tendon.

Chapman hasn't pitched in the majors since May 22. He made two minor league rehab appearances at Double-A Somerset and one with Triple-A Scranton/Wilkes Barre.

On Thursday in Houston, Yankees manager Aaron Boone said he may use Chapman in a variety of roles before he closes again. Boone's goal is to get Chapman "in rhythm" before using him in high-leverage situations.

Even when Chapman is ready, it's unlikely he'll take over closing duties from Clay Holmes, who has been virtually unhittable in that role this season. The right-hander is 4-0 with a 0.49 ERA and 14 saves in 35 games.

Before opening a three-game series against the Guardians, the Yankees also placed right-hander Miguel Castro on the paternity list.