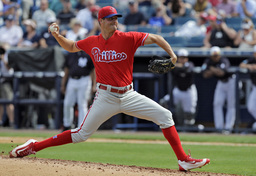 SAN DIEGO (AP) Mark Appel is a big league ballplayer nine years after he was selected No. 1 overall in the amateur draft.

Appel was promoted by the Philadelphia Phillies, but didn't pitch in the team's 4-2 victory over the San Diego Padres on Saturday night. The right-hander, who turns 31 on July 15, went 5-0 with a 1.61 ERA in 19 appearances for Triple-A Lehigh Valley.

"Completely overwhelmed. I have so many thoughts I want to share but can't find the words, so I'll just say this: I'm thankful," Appel posted on Twitter on Saturday before the game.

"Today, I get to play a game I love as a Major League Baseball player."

Appel is stepping in for right-hander Connor Brogdon, who was placed on the COVID-19 injured list.

Appel was selected by Houston with the No. 1 pick in the 2013 draft after a standout college career at Stanford. He was an Astros fan growing up in West Houston and received a $6.35 million signing bonus.

He went 10-3 with a 4.37 ERA while making a total of 25 starts at Double-A and Triple-A in 2015, and then was traded to Philadelphia in a multiplayer deal. But he announced in early 2018 that he was quitting the game, saying he was at peace with the decision.

"When I decided to leave baseball at the end of 2017, I never imagined I would be able to play again," Appel said on Twitter. "I was injured with no clear path to good health. I was emotionally and spiritually drained."

But the fire to play wasn't completely extinguished for Appel, and he found himself contemplating a comeback shortly after his retirement.

"I know I wouldn't be able to be here if I hadn't been able to have a good signing bonus," Appel said last March, referring to the $6.35 million signing bonus. "Because going 3 1/2 years without much of a salary and doing all the rehab and investing money in your health, a lot of guys don't have that luxury."

Appel rejoined the Phillies organization before last season, and he went 3-6 with a 6.06 ERA in 23 appearances with Double-A Reading and Lehigh Valley.

"I feel really thankful that I'm even able to be here. Because it is something that I love," Appel said. "I don't take that for granted."