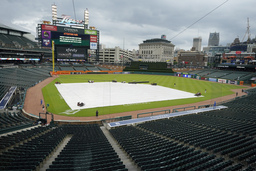 DETROIT (AP) The game between the Cleveland Guardians and Detroit Tigers on Friday was postponed due to inclement weather.

It will be made up as part of a split doubleheader on July 4 at 6:40 p.m. The originally scheduled game will begin at 1:10 p.m.

The starting pitchers for Friday's game will now pitch on Saturday afternoon. Guardians right-hander Shane Bieber, who struck out 10 Detroit batters in his last outing on Sunday, will make his 10th career start against the Tigers.

In his nine previous starts against the American League Central Division rival, Bieber is 6-3 with a 2.31 ERA while striking out 86 in 62 1/3 innings.

He'll be opposed by rookie right-hander Alex Faedo (1-1, 3.00 ERA), who collected his first career victory against the Guardians on Sunday. Faedo held Cleveland to two runs on five hits in 5 1/3 innings.

Detroit won the series opener 4-3 on Thursday on Miguel Cabrera's game-winning single in the ninth.

Cleveland right-hander Triston McKenzie (3-3, 2.70 ERA), who was scheduled to pitch on Saturday, will now start on Sunday.