Dodgers bring back Chris Taylor for $60M over 4 years 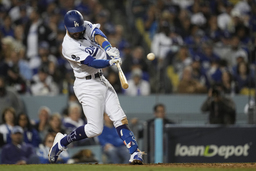 The 31-year-old Taylor was an All-Star for the first time in 2021, when he hit .254 with 20 homers and set career highs with 92 runs and 73 RBIs. He hit a game-ending homer in the NL wild-card game against St. Louis, then batted .476 in the NL Championship Series against Atlanta, with three homers in Game 5.

Taylor has played every position except catcher, first base and pitcher, and is a career .261 hitter with 79 homers. He was the co-NLCS MVP in 2017 and also a key contributor when the Dodgers won the World Series in 2020.

The Dodgers retained Taylor after losing ace Max Scherzer and shortstop Corey Seager in free agency this week. Scherzer signed a $130 million, three-year contract with the New York Mets, and Seager signed a $325 million, 10-year deal with the Texas Rangers.

He would receive a $2 million assignment bonus each time he is traded.