Morton vs. Lauer in Game 4 of NLDS between Braves, Brewers 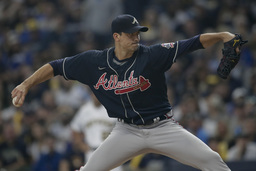 ATLANTA (AP) Charlie Morton was set to start Tuesday on three days' rest for the Atlanta Braves in Game 4 of their NL Division Series against the Milwaukee Brewers.

Morton, one of baseball's best clutch pitchers, hoped to give the Braves a clinching victory in the best-of-five series.

"He's great with it," Braves manager Brian Snitker said before the game. "I wanted to make sure he was great with it physically. He went out, threw the ball around (Monday), felt good. So I said, `Go for it.'"

Morton was opposed by Milwaukee's Eric Lauer, making his first appearance of this postseason. The left-hander went 7-5 with a 3.19 ERA in 24 appearances during the regular season, including 20 starts.

Morton worked into the seventh inning on Friday, throwing 85 pitches in a 2-1 loss to the Brewers in Game 1. He is the only Atlanta pitcher to give up any runs in the series, surrendering a two-run homer to Rowdy Tellez.

"There's no expectations here, just get this thing started and get it off the ground, see where it takes us," Snitker said. "I have every confidence just because of his experience, being through all this."

Atlanta bounced back from the series-opening loss with a pair of shutout victories to grab a 2-1 lead. If the Brewers won Game 4, the deciding game would be held Thursday in Milwaukee.

"I don't think you want anybody else up there other than Charlie," Braves third baseman Austin Riley said. "He's been in these situations many times. He's not going to get overwhelmed with it. He's going to come in and give you solid, quality innings. I'm excited that he's out there. "

Atlanta's Max Fried would start Game 5 on full rest if necessary. Otherwise, he would go in the opener of the NL Championship Series against either San Francisco or the Los Angeles Dodgers.

The Brewers decided not to pitch ace Corbin Burnes on three days' rest in Game 4, which would make him available to start Thursday if the series goes back to Milwaukee.

Burnes had hoped to pitch Tuesday, but the 26-year-old right-hander said his arm didn't bounce back as fast as he hoped after pitching six scoreless innings in the series opener.

The 37-year-old Morton pitched on short rest one other time in the postseason.

With Houston in 2017, he started Game 4 of the World Series, pitching 6 1-3 innings, then came back in relief in Game 7 to work the final four innings. He allowed just one run and earned the win in a Series-clinching 5-1 victory over the Los Angeles Dodgers.

Morton is the only pitcher in baseball history to win four winner-take-all games in the playoffs. He was 7-4 with a 3.34 ERA in 14 postseason appearances before Tuesday.