Martinez on ALDS roster, not in Game 1 lineup for Red Sox 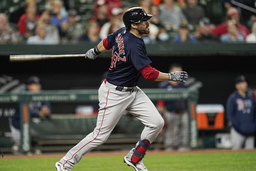 ST. PETERSBURG. Fla. (AP) Boston slugger J.D. Martinez is on the Red Sox roster but not in the lineup for Game 1 of their AL Division Series against the Tampa Bay Rays.

Martinez missed Tuesday night's win over the New York Yankees in the AL wild-card game because of a sprained left ankle. The best-of-five ALDS was scheduled to start Thursday night in St. Petersburg, Florida.

Boston manager Alex Cora said Martinez was available off the bench for Game 1.

"Obviously, four at-bats, it's going to be hard," Cora said. "He will keep getting treatment. If we need it in a big spot and in a situation that we feel it's the right one, not only because of his bat, but where he is at physically, we'll use him."

Martinez stumbled over second base while heading to the outfield in Sunday's regular-season finale at Washington.

Because the National League does not use a DH in games played in its stadiums, Martinez was playing right field against the Nationals. He stepped on the bag and twisted the ankle heading out to play defense in the fifth inning.

It was only the seventh game in 2021 that Martinez started in right field. He was in the starting lineup as a DH for 113 games and as the left fielder for 28.

Martinez hit .286 with an AL-leading 42 doubles and 28 homers and 99 RBIs during the regular season.

Tampa Bay has 13 pitchers on its roster that does not include speedy outfielder Brett Phillips. Lefty Ryan Yarbrough, who went 9-7 with a 5.11 ERA in 30 games, including 21 starts, was also left off.

Rays manager Kevin Cash plans to be aggressive in using his bullpen during the series. He said right-hander Drew Rasmussen will start Game 3 or 4, with the other contest being a bullpen day.

Sale made nine starts this year after having Tommy John surgery on March 30, 2020.

"It's been two years trying to get to this point," Cora said. "All the hard work, all the tears and sweat throughout the process. So we have to take care of him, but it was his turn and we feel comfortable with him."

Sale said he would be available to work as a reliever later in the series as well.

"There's no reason to save an arm to go sit on the couch, you know what I mean?" Sale said. "This is all the baseball we have left, and we're going to get certain points in these series where tomorrow might not come. So if that's the case and it's what's called upon, you know, it's my job."

Red Sox right-hander Matt Barnes, who lost his closer role in August, is not on the roster after being active for the wild-card game. Others dropped were catcher Connor Wong, infielder Jonathan Arauz and outfielder Jarren Duran.

Boston outrighted infielder Jose Iglesias to Triple-A Worcester, reinstated infielder-outfielder Yairo Munoz from the COVID-19 related injured list and outrighted him to Worcester on Wednesday. Iglesias was not eligible for the postseason roster because he signed with the team after the Aug. 31 cutoff.

Nick Anderson, Tampa Bay's closer during its run to the World Series last year, failed to make the roster. He didn't make his 2021 debut until Sept. 13 because of a right elbow injury and struggled in six late-season appearances.

The AL East champion Rays lost the World Series in six games to the Los Angeles Dodgers in 2020.