Cubs looking to pick themselves up after dismantling core 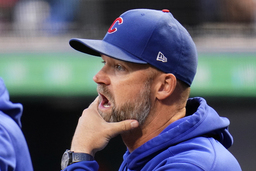 CHICAGO (AP) The Chicago Cubs took the wrecking ball to their championship core. Now, it's time to start piecing things back together.

While Kris Bryant, Anthony Rizzo and Kyle Schwarber turn their attention toward playoff games with new teams, the Cubs come into the offseason with a long list of issues to address.

It's a different spot for a franchise that produced winning records each of the previous six years. The Cubs made the playoffs five times in that stretch.

"I think it'll be a really interesting offseason from a bunch of different perspectives," outfielder Ian Happ said. "Not only with this group, but the entire industry. I think the big free agent class, it'll be really interesting to see just how things shake out."

The Cubs came into the season with a different look after trading ace Yu Darvish to San Diego and letting Schwarber and Jon Lester leave as free agents. Now, the team is barely recognizable.

Chicago went from leading the NL Central at 42-33 after Zach Davies and the bullpen combined to no-hit the Los Angeles Dodgers on June 24 to dropping the next 11 games. That convinced general manager Jed Hoyer to break up the core. He wound up trading Bryant to San Francisco, Rizzo to the New York Yankees and Javier Baez to the Mets prior to the July 30 deadline rather than risk losing them as free agents.

"That crowd at Wrigley and continuing to push for playoff baseball every year, I think that's the standard that's been set here," Happ said. "I think that the guys that came before me and built that ... that's everything we're pushing for on a yearly basis, to win enough baseball games to give ourselves a chance in the postseason."

The Cubs struck out 1,596 times to break the major league record by one set by Detroit two years ago. Happ led the team with 156, and Patrick Wisdom had a staggering 153 in just 375 plate appearances, though the 30-year-old set a club rookie record with 28 homers.

Chicago was also 21st in runs and 24th with a .237 batting average after hitting .220 last year during the pandemic-shortened season.

The Cubs have one more year of club control over Willson Contreras. And that also means they have a decision to make on the two-time All-Star catcher. Do they try to sign him to a multiyear contract or trade him? Contreras hit 21 homers in his third season with 20 or more and has been a key contributor for the Cubs since he debuted in 2016.

The Cubs clearly need to fix their rotation. They ranked 27th in the majors with a 4.87 ERA and none of their regular starters were below 4.00.

Davies, acquired in the Darvish trade, saw his ERA jump from a personal-best 2.73 in 2020 to a career-worst 5.78. Kyle Hendricks finished at a career-high 4.77 and allowed a major league-leading 200 hits.

Besides Contreras, the Cubs also have to decide whether to make Jason Heyward a platoon player and whether to offer Happ a contract.

Heyward, a five-time Gold Glove outfielder, hit just .214 with eight homers in 104 games. But he still has two seasons left on the eight-year, $184 million contract he signed prior to the 2016 season.

Happ hit .226 and was second on the team with a career-high 25 home runs. He finished strong, with a .317 average and eight homers in September.

Besides setting the major league mark for strikeouts, the Cubs used a record 69 players this season.