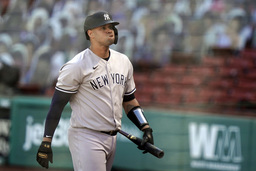 CLEVELAND (AP) Slumping slugger Gary Sanchez will be benched in favor of Kyle Higashioka in the New York Yankees lineup for their wild-card opener Tuesday night.

"It's kind of beyond what I would have imagined at the beginning of the season," Higashioka said.

With Giancarlo Stanton set to start at designated hitter, Sanchez - a two-time All-Star - won't crack the starting lineup and will instead be available to pinch-hit when the Yankees face Cleveland ace Shane Bieber.

"He was fine," Boone said about Sanchez's reaction. "He knows to be ready at any point, early in the game."

Sanchez batted .147 this season, which would have been lowest in the majors by far if he had enough at-bats to qualify. The 27-year-old hit 10 home runs, third among catchers, but looked lost at the plate for long stretches.

Behind the plate, Sanchez has been plagued by passed balls throughout his career.

Higashioka has played only in 72 major league games, 16 of them this season, and Tuesday will mark his postseason debut. The 30-year-old has been in the organization since 2008 - only outfielder Brett Gardner has been with New York longer.

Higashioka showed promise with the bat this season, including with a three-homer game against Toronto on Sept. 16. His greatest strengths are on defense, though, where he's considered an excellent pitch framer with strong intangible qualities.

Cole pitched to Higashioka in his final four regular season starts, a span when the Yankees ace was 3-1 with a 1.00 ERA. The pair has known each other since playing on a scout team together as teenagers in Southern California.

Cole had a 3.91 ERA in eight starts pitching to Sanchez.

"I know Gary," Higashioka said. "I know he's extremely mentally tough. I know if anything, it's going to spur him on to perform even better and get back to his normal self."