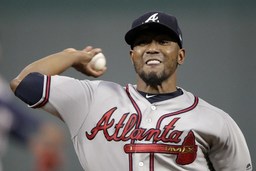 ANAHEIM, Calif. (AP) The Los Angeles Angels added another arm to their rotation, agreeing to a $9 million, one-year contract with right-hander Julio Teheran, a person familiar with the negotiations told The Associated Press .

The person spoke Thursday on condition of anonymity because the deal, first reported by ESPN, is subject to a successful physical.

Teheran spent the past seven seasons with the Atlanta Braves, who declined his $12 million option. He was 10-11 with a 3.81 ERA last season and was left off the Division Series roster against St. Louis, then added as a replacement when Chris Martin got hurt

The Angels had the second-highest ERA in the major leagues last season at 5.64 ERA and have made pitching a major priority during the offseason. They tried to sign Gerrit Cole before he acceoted a $324 million, nine-year deal with the New York Yankees and have turned their attention toward Dallas Keuchel and Hyun-Jin Ryu. They also acquired Dylan Bundy in a trade with Baltimore.

In addition to Teheran and Bundy, Los Angeles has Andrew Heaney, Shohei Ohtani and Griffin Canning in its projected rotation.