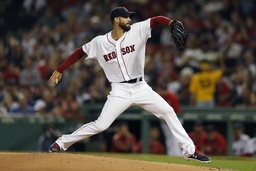 The person spoke on condition of anonymity Thursday because the agreement had not been announced.

Porcello grew up in New Jersey and went to Seton Hall Prep in West Orange.

New York also has a pending one-year contract with right-hander Michael Wacha. With Seth Lugo and Robert Gsellman also preparing to come to spring training as starters, the Mets have eight potential starters vying for five spots in spring training.