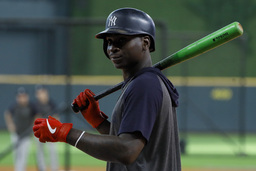 SAN DIEGO (AP) Free-agent shortstop Didi Gregorius is reuniting with manager Joe Girardi in Philadelphia, agreeing with the Phillies on a $14 million, one-year contract, a person familiar with the deal told The Associated Press.

The person spoke on condition of anonymity Tuesday because the agreement, first reported by the New York Post, had not been announced.

Gregorius spent the last five years with the New York Yankees, the first three playing for Girardi as Derek Jeter's successor at shortstop.

Girardi replaced Gabe Kapler as the Phillies' manager following a disappointing season in which Philadelphia faded to fourth place in the NL East. The team went 81-81 despite signing slugger Bryce Harper to a $330 million, 13-year contract.

Gregorius' 2019 debut was delayed until June 7 after Tommy John surgery on Oct. 17, 2018, to repair an elbow ligament torn during Game 2 of the AL Division Series at Boston. The left-handed hitter batted .238 with 16 homers and 61 RBIs this year, leaving him with a .264 average, 110 homers and 417 RBIs in eight major league seasons.

"Didi has been a great player for us. He's a great person," current Yankees manager Aaron Boone said. "Teams are lucky to have him because he's a really good player. And I think obviously going into a winter where he's healthy, would expect a really full, productive season from him."

Philadelphia is among the teams making aggressive offseason additions. The Phillies agreed to a $118 million, five-year contract with right-hander Zack Wheeler, who left the division rival New York Mets.

The Yankees were wary of a long-term commitment to a shortstop who turns 30 in February. Gleyber Torres can move from second base to shortstop and DJ LeMahieu can become the Yankees' regular second baseman, freeing up money for starting pitching.

New York landed the biggest prize on the free agent market late Tuesday night, adding Gerrit Cole to its rotation with a record $324 million, nine-year contract, a person familiar with the deal told The Associated Press.

The person spoke on condition of anonymity because the agreement had not been announced.

Gregorius' departure leaves the Yankees even more right-handed, especially with switch-hitting Aaron Hicks sidelined until at least mid-season following Tommy John surgery. The Yankees had 71.2% of their plate appearances by right-handed batters this year, according to the Elias Sports Bureau, their most since moving into the original Yankee Stadium in 1923.