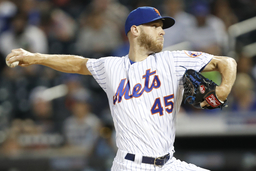 Right-hander Zack Wheeler and the Phillies agreed to a $118 million, five-year contract, two people familiar with the deal told The Associated Press on Wednesday.

Both people spoke to the AP on condition of anonymity because the agreement, which is subject to a successful physical, had not been announced.

He will join a rotation led by Aaron Nola that also includes Jake Arrieta. The Phillies may pursue another front-line starter - Stephen Strasburg, perhaps - to join a staff that has Zach Eflin, Vince Velasquez and Nick Pivetta.

"He knows all of us hitters very well," Mets role player J.D. Davis said earlier in the day. "He's a great pitcher, great stuff. I only wish the best for him."

Wheeler chose less money to stay on the East Coast. The Chicago White Sox offered Wheeler a five-year contract worth more than $120 million guaranteed, a person with direct knowledge of those negotiations said. That person spoke on condition of anonymity because of the sensitivity of the situation.

Philadelphia spent big money last season on free-agent outfielders Bryce Harper and Andrew McCutchen and acquired catcher J.T. Realmuto and shortstop Jean Segura in trades. The Phillies didn't address starting pitching, and the staff's struggles cost them in the second half as they faded to an 81-81 finish. Manager Gabe Kapler was fired and replaced by Joe Girardi.

"He's a great pitcher, but this whole division is stacked with pitchers," Mets outfielder Brandon Nimmo said. "It's just going to be tough day in and day out."