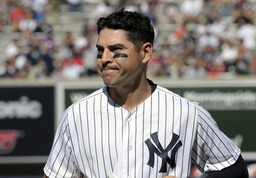 NEW YORK (AP) The Yankees plan to not pay Jacoby Ellsbury the remaining $26 million due under his contract, contending he violated the deal by getting unauthorized medical treatment.

New York general manager sent a letter to Ellsbury and his agent, Scott Boras, informing them the team converted his contract to a nonguaranteed deal, a person familiar with the decision told The Associated Press on Friday. The person spoke on condition of anonymity because the team had not made any public statements.

Ellsbury has not played since 2017 and was released by the Yankees on Wednesday.

According to the person who spoke with the AP, the Yankees said he was treated by Dr. Viktor Bouquette of Progressive Medical Center in Atlanta without the team's permission.

Ellsbury is owed more than $26.2 million as part of his $153 million, seven-year contract: more than $21.1 million for the final guaranteed season plus a $5 million buyout of a $21 million team option for 2021. If Ellsbury is not paid, nearly $21.9 million would come off the Yankees' luxury-tax payroll next year.

New York's decision to not pay him was first reported by the New York Post.

The players' association can file a grievance challenging the conversion of the contract to nonguaranteed. Cashman and Boras did not immediately respond to requests for comment.

"The players' association will vigorously defend any action taken against Jacoby or his contract and is investigating potential contract violations by his employer," the union said in a statement.

Now 36, Ellsbury hit .264 with 39 homers, 198 RBIs and 102 stolen bases in 520 games in six seasons with the Yankees. He injured a muscle in his right side early during spring training in 2018, developed a bad back and had surgery that Aug. 6 to repair a torn labrum in his left hip. He experienced plantar fasciitis in his right foot during his rehab program before spring training this year.

Notes: OF Zack Granite agreed to a minor league contract with the Yankees. The 27-year-old from Staten Island appeared in 40 games for Minnesota in 2017, his only big league season. Traded to Texas last March, he hit .290 with three homers and 37 RBIs for Triple-A Nashville, then became a free agent.