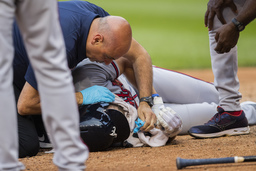 Culberson was released from a hospital Saturday and was scheduled for additional examinations on Sunday in Atlanta.

"The guys that did see him said he looked better than they thought he would this morning," Braves manager Brian Snitker said. "He sounded good, for what he'd been through. It's all very encouraging."

Rodney, who was throwing his first pitch of the game, apologized to the Braves on Sunday.

"I only saw that I hit him in the face, it was a scary moment for me, the player, for them," Rodney said. "I don't want to hit nobody, no matter where."

Washington manager Dave Martinez said he called Snitker on Sunday morning to extend his apologies and express concern for Culberson.