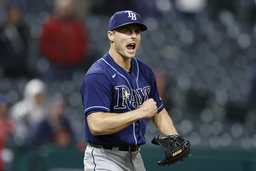 CLEVELAND (AP) With Hurricane Ian and the playoffs foremost on their minds, the Tampa Bay Rays started a season-ending trip with a gritty win.

A wild-card spot is drawing near.

The victory came as the Rays kept an eye on the storm bearing down on their home state.

"I'm sure it's tough, a lot of people have their families down there, their property and stuff," said Calvin Faucher, who worked the 11th for his first career save. "We have TVs in here so we can see the news at all times. We're definitely staying up to date."

Tampa Bay blew a 4-3 lead in the eighth inning before scoring twice in the 11th.

"It could have been a very frustrating day, given how we performed early," Rays manager Kevin Cash said. "I'm really happy the guys stayed positive and found a way to come up with big hits."

In the 11th, Wander Franco drew a two-out walk, and Taylor Walls, the runner at second to start the inning, took third on a wild pitch. Franco stole second and Ramirez, who played 99 games for Cleveland last season before being released, pulled a 1-2 pitch from Trevor Stephan (6-5) down the left-field line to score both runners.

The clutch hit - Tampa Bay's first since the fourth inning - allowed the Rays to hand the AL Central champion Guardians just their fourth loss in 22 games.

Javy Guerra (2-0) pitched one inning for the win and Faucher, Tampa Bay's ninth pitcher, finished it off.

After the game, Faucher was doused with beer and other cold beverages in the shower area as the Rays moved a little closer to locking up a spot in the postseason. Their magic number over Baltimore to clinch a spot is three.

Jose Siri hit a two-run homer for Tampa Bay, which scored four times in the fourth off Guardians starter Shane Bieber, who may have been affected by a 23-minute rain delay in the third.

"Felt good in my delivery. Felt good coming out of the weather delay and then somewhere in there had a little bit of a lapse and gave up a few extra-base hits and would have liked a few pitches back, obviously." Bieber said. "It is what it is. On to the next one."

Rays starter Corey Kluber lasted just four innings in his third career start against the Guardians, his team from 2011-2019. It was the right-hander's first start as a visitor in Cleveland, where he won two Cy Youngs.

"There's less immaculate innings than there are no-hitters," Bieber said. "It's more rare, technically. What a feat. I hope one day I'll be able to get one. Both he and Plea (Plesac) have done it and I've seen them both. What a special thing."

The Guardians clinched their division title on Sunday in Texas, but a pregame threat of rain forced the team to postpone a flag-raising ceremony to celebrate its unexpected title until Saturday.

It's nothing new for the Guardians, who have been rained out 10 times at Progressive Field.

Following a 23-minute rain delay in the second, Jose Ramirez put the Guardians up in the third with an RBI triple. Cleveland has tripled in five straight games, the club's longest streak since a five-gamer in 1968.

The teams could meet again in October, which would pit managers and good friends Cash and Terry Francona against each other.

Cash was Cleveland's bullpen coach under Francona in 2013-14, and the two are close.

"He's one of the most special people in my life, and they're either going to be happy or we are," Francona said maybe seeing the Rays again. "It's hard when you care that much about people and then you're kind of fighting to beat their brains out."

Rays: 3B Yandy Diaz (left shoulder) grounded out as a pinch-hitter in the 10th after being sidelined since Sept. 19. Cash is hoping to get him in the starting lineup Wednesday.

Guardians: Plesac (broken hand) threw a bullpen and is expected to make his first start since Aug. 27 on Friday. Plesac got hurt punching the ground in frustration after allowing a homer in Seattle.

Rays: RHP Tyler Glasnow, Tampa Bay's No. 1 starter, returns from Tommy John surgery to make his first start since June 14, 2021. Glasnow will be on a pitch count, but the Rays are hoping he can help them in the postseason.