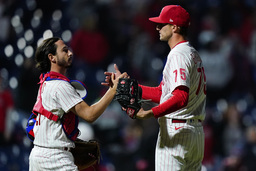 Alec Bohm had three hits for the Phillies (83-67), who moved into second in the NL wild-card standings, a half-game ahead of San Diego.

"Stay on the winning train," Nola said. "Every game matters right now. We have to stay focused on tomorrow. Win a game tomorrow."

Dansby Swanson and Eddie Rosario doubled for the Braves, who dropped their third in a row. Atlanta hasn't lost four straight all season, and it's just the fourth three-game slide this year for the reigning World Series champions.

"If you handle adversity, there's good things on the back end of it," Atlanta manager Brian Snitker said. "We'll keep fighting and get 'er going again."

The Braves, who trailed the NL East-leading Mets by 1 1/2 games coming into the day, are on top of the NL wild-card standings.

Philadelphia jumped on Jake Odorizzi (5-6) for four runs in the second inning. A pair of singles by Bohm and Brandon Marsh and a four-pitch walk to Jean Segura loaded the bases with no outs. Bryson Stott hit a sacrifice fly before Matt Vierling's RBI single, and Hoskins added a two-run double.

The Phillies tacked on four more runs in the fourth, highlighted by Hoskins' two-run shot to left for his 29th of the season.

"It was nice to jump on them early," Hoskins said. "A better sign is we didn't stop. We continued to add on."

Said Snitker, "The game kind of got away from us."

It was more than enough for Nola (10-12), who allowed four hits, struck out eight and walked three. The right-hander has 218 strikeouts and just 29 walks for the season.

Odorizzi, making his eighth start with the Braves since he was acquired in an Aug. 1 trade with Houston, gave up eight runs and 10 hits in four innings.

"Too many pitches, too many long counts, couldn't put hitters away," Snitker said. "Just wasn't his day."

Philadelphia improved to 10-9 in September and calmed concerns brought on by a five-game slide that preceded their current win streak. The Phillies are looking to reach the postseason for the first time since 2011 when they won the final of their five straight NL East titles.

Braves: OF Ronald Acuna Jr. (back) sat out for the second consecutive game.

Phillies: Marsh returned to the lineup after missing the previous two games with a left knee contusion, but he was lifted after the fifth as a precautionary measure, interim manager Rob Thomson said. He went 2 for 3 with an RBI.