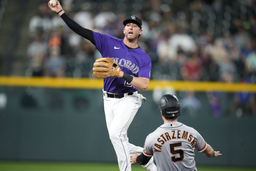 San Francisco lefty Carlos Rodon was originally scheduled to start Tuesday but was pushed back to Friday at Arizona because of a blister on his pitching hand.

John Brebbia started and pitched one inning in his 70th appearance, the most in the majors this season. Tyler Rogers (3-4) pitched two innings for the win and Jarlin Garcia got the final out for his first save. Sean Hjelle was the bullpen workhorse, throwing 66 pitches in four innings and allowing four runs.

"It's about as good as it gets," manager Gabe Kapler said of Hjelle. "We've seen three outings from him and two of them just phenomenal, lights out."

C.J. Cron homered, doubled and drove in three runs for the Rockies to set a career high in RBIs with 101.

Colorado starter Kyle Freeland (9-10) was solid for five innings before running into trouble in the sixth, when he allowed three straight doubles, giving the Giants a 3-0 lead. Freeland was charged with three runs - two earned - in five-plus innings.

San Francisco got an unearned run off of Freeland in the third when left fielder Yonathan Daza misplayed Joey Bart's flyball into a three-base error. Bart scored on a single by Mike Yastrzemski.

Freeland had allowed two or fewer runs in his previous four starts and has pitched five or more innings in 18 of his last 20 starts.

Cron homered off Hjelle in the sixth, his 29th of the year.

"I felt like if he had a few more pitches, maybe maintains his (velocity) a little bit better, he might be able to get through that game for us," Kapler said of Hjelle. "In this ballpark, that's the only way to pitch. ... The only way to survive is by throwing a ton of strikes and forcing the action, and he did exactly what we would have hoped and gave us a chance to win the game."

Villar answered with a solo shot in the seventh off Jake Bird. Bart singled and scored on Slater's second double of the game.

Cron's third hit, a two-run double off of Thomas Szapucki in the eighth, got Colorado within two. Thairo Estrada's second hit of the night, an RBI single in the ninth, made it a three-run game.

Yunior Marte walked two Rockies in the ninth to bring the tying run to the plate with two outs. Garcia got Ryan McMahon to hit a flyball in foul territory in left field and Slater made a sliding catch as he hit the wall to end the game.

"Off the bat I thought I had a play," Slater said. "I actually thought it was going to be fair. And then towards the end I saw it drifting a little bit more and at that point, it was just like, `All right, I'm on track, just make sure I slide in time not kill myself.'"

Slater was activated from the 10-day injured list on Monday after missing 15 games with a sprained left hand.

"That didn't really cross my mind, it was more about making the play," he said.

Rockies: The MRI on 2B Brendan Rodgers' left hamstring came back clean, manager Bud Black said. Rodgers left Sunday's game at the Chicago Cubs after feeling his leg tighten up. Black said Rodgers is day to day. ... OF Kris Bryant (left foot) has been getting treatment and is expected to resume hitting in the cage, Black said, adding that there is no timetable for Bryant's return.