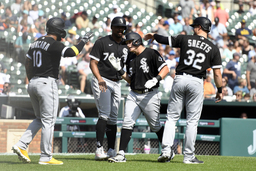 "This road trip has been very driven in the right direction," Chicago right-hander Vince Velasquez said. "We're taking the right steps to do some damage against Cleveland at home."

The White Sox are trying to catch the AL Central-leading Guardians, but they are running out of time. They trail Cleveland by 3 1/2 games after the Guardians lost 3-0 to Minnesota.

Chicago hosts Cleveland on Tuesday night in the opener of a three-game series.

"It's September - everybody's tired, everybody's legs are hurting and bodies are sore," Vaughn said. "But we just have to give it our all, every day, no matter what you've got."

The White Sox improved to 12-4 against the last-place Tigers in the season series. The teams play again in Chicago next weekend.

The reigning AL Central champions grabbed control with five runs in the fifth. Sheets snapped a tie with a bases-loaded walk against Drew Hutchison (2-9), and Vaughn made it 7-2 when he drove a 1-2 slider from James Foley deep to left-center for his team-high 17th homer.

"That (home run) was big," White Sox acting manager Miguel Cairo said. "With a short-handed bullpen, it was nice to put up a big number right away and give a breather to the bullpen."

The Tigers rallied in the sixth. Jimmy Lambert replaced Jose Ruiz with the bases loaded and no outs, and then brought home a run when he issued a four-pitch pitch to Kerry Carpenter.

"He's been doing that all year round since he joined the bullpen," Cairo said. "He's been the guy to come in and shut down innings. That was our plan."

Chicago then got three runs in the seventh. With Jose Abreu aboard after a leadoff walk, Jimenez greeted Garrett Hill with a 450-foot drive to straightaway center.

"I was about to go on-deck and it sounded like a gunshot," Vaughn said. "That one was special. He can hit some baseballs far."

Jimenez added an RBI double in the eighth. He is 17 for 43 with five homers and 16 RBIs over the last 11 games.

Willi Castro hit a two-run homer for Detroit in the first, and Javier Baez added a solo shot in the eighth. Baez was back in the lineup at designated hitter after dealing with swelling in his knee after an awkward play at the plate Friday.

"There's a fine line there between pitching aggressively but also giving yourself a chance to get out of that (fifth) inning," Tigers manager A.J. Hinch said. "And that inning kept building and building, and it obviously exploded."

Velasquez allowed two runs and three hits in four innings in his first start since June 9. Velasquez was pressed into action because Johnny Cueto is dealing with an illness.

"Giving up a home run, I take full blame for that, but once I settled down and started figuring it out, it was a good, easy and smooth ride," Velasquez said. "You just always have to be alert."

"It's been so awesome to see our bullpen," Cairo said. "Everyone is contributing. And everyone in the lineup is doing the little things to win ballgames."

White Sox: CF Luis Robert (hand) was held out of the lineup as a precaution. Cairo said Robert could return Tuesday. ... RHP Michael Kopech (shoulder), who was placed on the 15-day IL on Saturday, said he was shut down as a precaution and hopes to return before the end of the season.

White Sox: There was no word on a starting pitcher for either team for Tuesday. Chicago's pitching plan remains in flux after Cueto got sick.