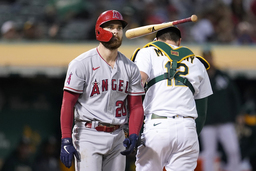 OAKLAND, Calif. (AP) Jose Suarez added a second changeup to his pitching repertoire this season and it has given him "100% confidence" to offer batters different looks.

He certainly kept the Oakland Athletics off balance all night.

Luis Rengifo homered in the first and it held up to provide dear friend Suarez with just enough support.

"He's like my brother. We grew up together," Suarez said of his Venezuelan countryman from the same city, Naguanagua. "It's great when he hits well and I pitch well and we win."

Suarez (4-4) gave up two hits while earning his second straight win against the A's. He hasn't allowed an earned run in his last 18 innings.

"Gifo's ball was a bomb off a tough pitcher," Angels interim manager Phil Nevin said. "I really like Irvin. He's pitched well against us both times. We were able to get one across and that's what we needed."

Aaron Loup worked the eighth and Ryan Tepera finished for his second save to close out the two-hit shutout in just 2 hours, 14 minutes.

"I don't start a game with the thought that I'm coming out early. I start a game to finish it," Irvin said. "Haven't done that yet at this level, but that's how I pitch. That's how I've always been."

Steven Duggar, claimed off waivers Sunday from Texas, made his Angels debut when he entered to play left field in the eighth.

Shohei Ohtani had the night off a day before he pitches for the Angels. Nevin gave the two-way star an option to rest Monday or Wednesday but Ohtani prefers to get out and move after a start on the mound so he is slated to play Wednesday's series finale.

On Sunday in Seattle, Ohtani was visited by trainers before his second at-bat after having his left foot stepped on by Mariners pitcher Marco Gonzales in a collision near the on-deck circle.

"Nothing to do with his foot. He'll be fine," Nevin said.

Angels: OF Mickey Moniak broke his left middle finger on a bunt during Sunday's 7-1 win at Seattle. He could play again this season. "I think we got the best news possible when you're dealing with a fracture," Nevin said. ... RHP Archie Bradley is expected to soon begin a throwing program as he works back from a broken right elbow.

Athletics: RHP Brent Honeywell Jr. is slated to throw a simulated game Friday in Arizona as he recovers from a stress reaction in his pitching elbow that has sidelined him all year. The A's remain optimistic he will return this season in a role to be determined.

In the dugout pregame, Nevin wished bench coach Ray Montgomery a happy 53rd birthday and confirmed he got him a gift. Details, please? Nevin hesitated, then said: "It's a nice bottle of something. Really nice."

Ohtani (9-7, 2.83 ERA) makes his ninth 2022 road start having lost to the A's at home his last time out Wednesday. He looks to reach double-digit wins for the first time in his four major league seasons after finishing with nine last year.

RHP James Kaprielian (3-5, 4.32) pitches for Oakland having gone 3-0 with a 1.89 ERA over six starts spanning July and August following an 0-5 showing in May and June.