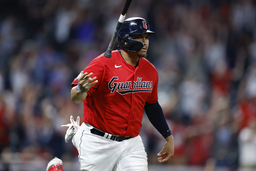 CLEVELAND (AP) Josh Naylor flipped his bat wildly when the ball soared over the fence and flung his helmet 20 feet in the air as he approached home plate.

Naylor hit a two-run homer with two outs in the 10th inning, completing a four-run rally that gave the Guardians a thrilling 7-6 victory over the Minnesota Twins on Wednesday night.

A passed ball by Ryan Jeffers scored Steven Kwan, and Cotton retired Jose Ramirez and had two strikes on Naylor before he drove his first game-ending homer the other way onto the left-field porch.

"I just tried to hit a homer, to be honest," Naylor said, smiling. "I was trying to end the game. I didn't want to hit a single. I wanted to end it. I just wanted to win."

After rounding the bases, Naylor excitedly headbutted the 63-year-old Francona, who was wearing a batting helmet. Earlier this season, a fired-up Naylor wildly threw his lid in the dugout following a big home run against the White Sox.

"I've got to go ice my neck," Francona joked. "I think Josh enjoys being in those situations, and that was pretty special right there."

Minnesota took a 6-3 lead in the top of the 10th on an RBI single from pinch-hitter Carlos Correa and a two-run homer by Max Kepler off Eli Morgan (4-2). It was Kepler's 14th home run in 45 career games at Progressive Field.

The teams have split four games in the five-game series, keeping the Twins' lead over the second-place Guardians in the AL Central at two.

"I don't think you'll see a game much more difficult on a team than that," Minnesota manager Rocco Baldelli said. "We've got to find a way to finish games out."

Alex Kirilloff hit a two-run homer in the sixth and Gio Urshela followed with a solo shot off Guardians starter Cal Quantrill, tying the score at 3 with the Twins' second back-to-back homers of the year.

Naylor drove in Cleveland's third run with a sacrifice fly in the third inning and Rosario had four hits. The Guardians scored twice in the first on an RBI grounder from Franmil Reyes that included a throwing error by second baseman Luis Arraez.

Kirilloff matched his season best with three hits. Arraez, the AL batting leader, went 0 for 5 for the Twins, dropping his average to .337.

Quantrill pitched a career-high eight innings, allowing three runs on eight hits while striking out three. The right-hander did not issue a walk.

"Josh has been heroic this year with late-inning homers," Quantrill said. "That's huge. That's awesome. He deserves it."

Pagan has struggled losses in the series, retiring only one batter and allowing five total runs - four earned - in two appearances.

"Pagan is in a rut at this point, you can't deny that," Baldelli said. "We've got to figure out what's next for him."

Twins OF Byron Buxton amassed 52 home runs, 95 RBIs and 112 runs over his previous 162 games, a span that began on Sept. 1, 2019. The oft-injured speedster did not start Wednesday, but entered as a pinch-hitter in the ninth. "I don't think I've ever seen anyone hit at that level for that period of time - and it still feels like he's capable of more," Baldelli said. "Buck is a fantastic player."

Twins: Correa (leg soreness) was not in the lineup after playing all 18 innings in the field during Tuesday's twinbill. Baldelli said the two-time All-Star shortstop was a "little beat up," but used him off the bench in the 10th. "Carlos wanted both games in the doubleheader, but we had to get him a day off in this series," Baldelli said.

Guardians: C Austin Hedges (concussion), who is on the seven-day injured list, is working toward catching a bullpen. "He had more of a Hedgie personality than he's had for a couple days, so I think he's doing OK," Francona said. Hedges was struck by a foul ball Saturday against the Red Sox.

Twins: RHP Chris Archer (2-3, 3.14 ERA) seeks his first career victory over Cleveland in the five-game series finale. Archer is 0-7 with a 5.87 ERA in eight games, all starts, against the Guardians franchise.

Guardians: RHP Shane Bieber (3-4, 3.07 ERA) lost for the first time since May 22 in his last start, giving up three runs over seven innings against Boston. Bieber is 2-1 with a 2.52 ERA in his past six outings.