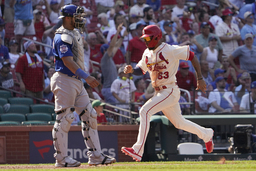 Juan Yepez lined a one-out double to the left field wall off Cubs reliever Mark Leiter Jr. (1-2) in the eighth, and pinch-runner Edmundo Sosa advanced to third on a wild pitch before scoring the go-ahead run on Herrera's fly.

"Sosa has been like my brother here," said Herrera, a rookie catcher vying to replace Yadier Molina when he retires. "He's helping me a lot trying to understand how to handle things. I know I did something different, and he said focus now because you're going to get an important at bat to help the team win."

Harrison Bader advanced to second on Herrera's out and scored on Tommy Edman's single to right field to extend the lead to 5-3.

Miles Mikolas allowed one run on four hits while matching his season high of nine strikeouts. His 2.06 career ERA in 13 games (11 starts) against the Cubs leads all active pitchers with at least 10 starts.

Adrian Sampson allowed two runs when St. Louis strung together a trio of two-out hits in the first inning, but he gave up just one additional hit in his five innings of work.

"The two runs he gave up were soft contact, just found some outfield grass," Cubs manager David Ross said about Sampson. "I thought he threw the ball really well, got a nice rhythm there, kept those guys off balance, a really nice performance."

Rafael Ortega belted his fourth home run of the season, a two-run shot off Giovanny Gallegos, in the eighth inning to tie it 3-all.

"He's done nothing but have quality at bats," Ross said. "A big home run right there to tie it up for us. He's going to be locked in whenever he gets a chance.

Brendan Donovan had a bloop single down the left field line in that first inning that scored Paul Goldschmidt and Nolan Arenado to give St. Louis a 2-0 lead.

Alfonso Rivas drove in Patrick Wisdom on a sacrifice fly to center field in the fifth inning to cut the Cubs deficit to 2-1.

Dylan Carlson stroked an RBI double to right field off Rowan Wick to score Arenado in the sixth inning to expand the Cardinals lead to 3-1.

Goldschmidt went 2 for 4 to boost his major league-leading home batting average to .395.

Cardinals: LHP Genesis Cabrera was placed on the injured list with no designation. The club recalled RHP Jake Woodford from Triple-A Memphis.

The Cubs and Cardinals wrap up their three-game series Sunday as RHP Alec Mills (0-1, 8.59 ERA) will make his first start of the season after pitching in five games out of the bullpen. He is 0-2 with a 4.26 ERA in seven career outings against St. Louis. RHP Jack Flaherty (0-0, 7.50 ERA) will make his third start after opening the season on the injured list with right shoulder inflammation.