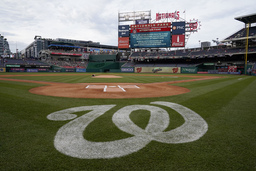 WASHINGTON (AP) The game between the Colorado Rockies and Washington Nationals on Friday night was postponed due to severe storms forecast for the Washington area.

The game will made up at 12:05 p.m. Saturday as part of split doubleheader. Saturday's originally scheduled game was moved from 4:05 to 6:05 p.m.

The Nationals won the opening game of the series 7-3 on Thursday night.

NATIONALS: RHP Stephen Strasburg (thoracic outlet surgery) will make his second rehabilitation appearance for Class A Fredericksburg on Sunday with a goal of 60-70 pitches. ... INF Carter Kieboom underwent Tommy John surgery Friday. Kieboom went on the injured list before the season and has been dealing with an ulnar collateral ligament sprain and flexor mass strain in his throwing elbow.

Rockies: Colorado did not immediately announce Saturday's starting pitchers. LHP Austin Gomber (2-4, 4.11 ERA) was scheduled to pitch Friday and warmed up. He held the Nationals to two runs on seven hits over 6 2/3 innings in a win at Coors Field on May 4, striking out seven and walking six. ... RHP Chad Kuhl (3-2, 3.67 ERA) was scheduled to pitch Saturday. He is 0-2 with an 8.25 ERA in his last three starts. Kuhl is 1-2 with a 5.74 ERA in four career games - three starts - against the Nationals.