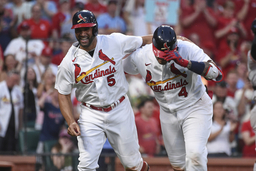 NEW YORK (AP) The game between the St. Louis Cardinals and New York Mets scheduled for Monday night was postponed because of rain in the forecast and will be made up as part of a single-admission doubleheader Tuesday at Citi Field.

The first game will begin at 3:10 p.m., with the nightcap to follow 30-40 minutes after the opener ends.

The teams are set to play a four-game series - their first meeting since getting into a bench-clearing scuffle last month in St. Louis.

With heavy thunderstorms in the evening forecast, the game was postponed a little more than 3 1/2 hours before it was supposed to begin.

"With severe weather in the area, we are thinking about everyone's safety, so tonight's game has been postponed," the Mets posted on Twitter.

Miles Mikolas (3-1, 1.49 ERA) had been slated to pitch for the Cardinals, who arrived in New York off a 15-6 blowout of the San Francisco Giants at home Sunday night.

The Mets were expected to tab long man Trevor Williams (0-2, 5.73) for a spot start in place of injured Tylor Megill.

The team said Williams and fellow right-hander Taijuan Walker (1-0, 3.00 ERA) will start Tuesday, with the order to be announced.

Walker and former Mets lefty Steven Matz (3-3, 6.40) were the scheduled starters Tuesday night before Monday's game was called off.

New York lost 8-7 at home to Seattle on Sunday, dropping two of three to the Mariners over the weekend for its first series loss this season. The Mets entered Monday with the best record in the National League at 23-13.

Tuesday will mark the Mets' fourth doubleheader this year. They swept the Giants on April 19 and the Atlanta Braves on May 3, both at home, before splitting a twinbill in Philadelphia on May 8.

It will be the first doubleheader this season for the Cardinals (19-15).